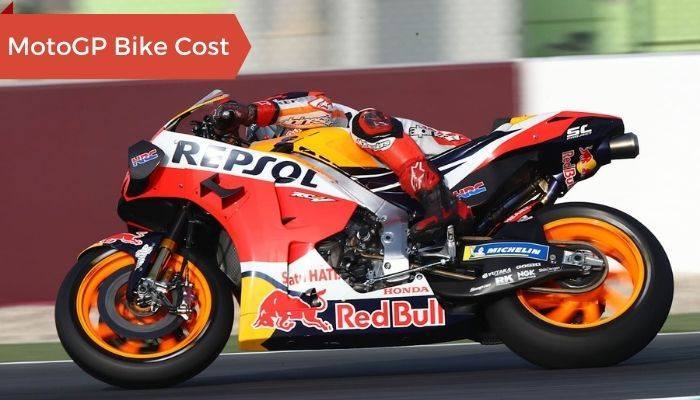 When it comes to the motorbikes used in these racing Championships it varies based on the cubic capacity of the bike’s engine, the larger the engine chamber, more powerful the bike. The maximum cost for a normal on the road-legal motorbike is around $130,000 to $250,000. But, the bikes used by MotoGP teams are worth a staggering $1 Million to $2.5 million.

A single fall or accident on a MotoGP bike costs a loss of nearly $25,000 to $50,000; thus these bikes come with insurance. The bikes your favourite MotoGP riders use are purposely built to reach incredible top speeds of around 350km/h and are not available for purchase to ordinary people to ride on public roads.

What makes MotoGP bikes so expensive?

MotoGP teams upgrade and tune the factory-made engines they receive to increase the top speed and acceleration of the bike, which sometimes cost up to $400,000. It is basic science that to reach faster speed; the bikes should be light so the weight distribution should be precisely balanced

Therefore, they can’t remove vital parts. MotoGP teams instead use rare lightweight materials like carbon fibre, titanium, and magnesium to make the parts of the bike light as well as strong. The price of carbon fiber is ten times more than that of steel.

All of these bikes are hand-built thus the cost of hand labour also adds up. While designing and customizing the engines teams have to ensure the engines have great mileage and give reliable peak performance as according to MotoGP rules a bike is only allowed 20 litres of fuel.

MotoGP bikes use race-specific components that are often put under intense conditions during racing, many of these parts like tires, engine oil, and protective gear only last just a few hours.

These tires are made of different materials and custom-designed for more grip and stickiness to the tracks to prevent skidding and withstand higher temperatures due to the high speed, and they have shorter life span compared to local on-road tires.

Every MotoGP teams try to upload the latest expensive technology on their bike to receive live updates on the bike status and conditions to ensure the safety of driver and peak performance. These bikes have multiple expensive sensors and pneumatic valves for smoother transmission and gear changing.