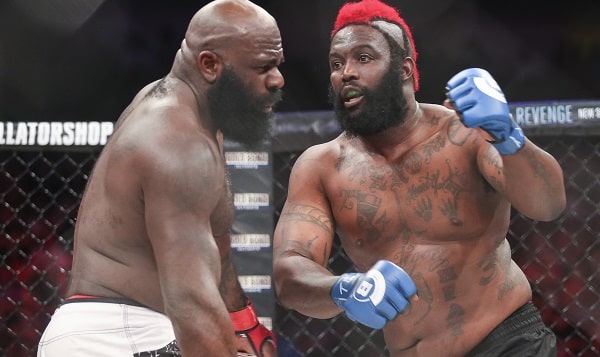 Mariusz has no doubt won five strongman titles. But, his strength did not work in MMA. In 2009, he signed a four-fight deal with Poland’s KSW. He has won 13 fights, but the level of competition was not very high. Pudzianowski is known as a one-round fighter as he quickly gassed out.

He got limelight from his excellent performance in street fights. But, obviously, he lacked MMA skills. Everybody believed he would make it big in the professional circuit. Kimbo won numerous fights, but his opponents were that good. Slice got massive hype but could not justify it.

Hong Man Choi won the K-1 World Grand Prix. But, he defeated 200lbs lighter and 40cm shorter kickboxer Kaoklai Kaennorsing for the title. Nevertheless, he made his MMA debut. After fighting a few fights, it was clear that Hong Man Choi does not belong to MMA.

Joe Son is one of the worst fighters in MMA. He has a professional record of 0-4. Despite being a black belt in Taekwondo, he could not perform in MMA. Son has been involved in many criminal acts and is currently serving a life sentence in prison.

He is a former player of the Brazilian national basketball team, professional wrestler and MMA fighter. Giant does not possess professional fight skills. This could be justified because he lost a fight against Ikuhisa Minowa, a 5’9” grappler and 200lbs lighter. Silva also holds the record of one of the tallest WWE wrestlers.

Just like Kimbo Slice, Dhafir Harris was also a street fighter before he switched to MMA. He started his MMA career with two consecutive knockout victories. The biggest embarrassment in his career was when he faced Kimbo at Bellator 149. Both the fighters nearly collapsed due to exhaustion in the first round only. He later got cardiac arrest during the fight and recovered later.

He is a talented boxer but a good MMA fighter. He held IBF belts in three divisions but made the wrong decision of switching to MMA. In his very first fight at UFC, he faced Randy Couture and was brutally defeated.

Bob Sapp was one of the fans’ favourites in Japan. He enjoyed early success in MMA, but later in his career, he started facing defeat whenever he faced decent opponents. He went on to 14 fights losing streaks.

With a professional record of 1-14, Kenneth is the worst fighter in MMA history. Kenneth has been made fun of continually fighting despite losing almost everyone, one of them. In the years 2006 and 2007, he fought 14 fights and 16 fights, respectively.