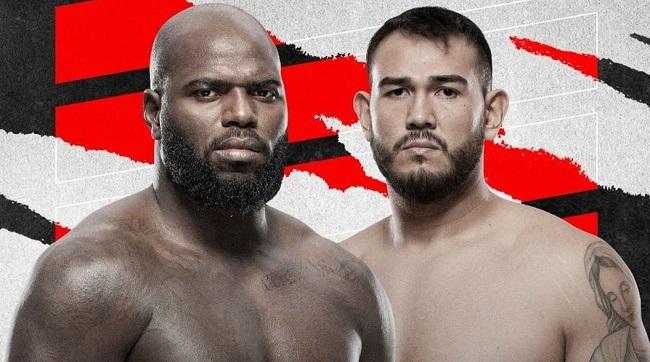 The UFC is set to return to action this Saturday night with UFC Vegas 28, headlined by a blockbuster heavyweight showdown between Jairzinho Rozenstruik and Augusto Sakai. MMA fans in the United States can watch UFC Vegas 28 live stream online on ESPN+ at a cost of $6.

Both the fighters would like to move on in the weight categories with a win in this fight as both of them have come up with a loss in their last game and this would be an important match of their career.

Rozenstruik has fought 7 times while winning 5 of the matches. And he also holds the record of 11-2 personal record. Francis Ngannou and Ciryl Gane are the only ones who have won against him. Alistair Overeem, Andrei Arlovski, and Junior Dos Santos are some of the legends in his victims’ list.

Sakai made his professional MMA debut in October 2011 in his native Brazil. In the first two years of his career, he amassed a record of six wins and no losses with all but one of his wins coming via knockout.

As for Sakai, he lost to ‘The Demolition Man‘ in his last fight via a 5th-round stoppage. The 30-year-old Brazilian is currently 4-1 in his UFC career so far.

Wins over Blagoy Ivanov, Marcin Tybura, Andrei Arlovski, and more are some of his most notable triumphs. Sakai currently has a professional record of 15-2.

When and Where to Watch Rozenstruik vs Sakai Live Fights?

Rozenstruik vs Sakai fight live streaming is available on ESPN Plus for American fans. Users will need to buy the ESPN+ subscription or must have the active subscription to watch UFC Vegas 28 live online on ESPN+. The paid subscription of ESPN will last around $6.

MMA fans in India can watch the Preliminary card at 4:30 AM on Sunday and the main card at 7:30 AM using the SonyLIV subscription. Jairzinho Rozenstruik and Augusto Sakai fight card live telecast will be shown on Sony Ten 2 and Sony Ten 3 in India.

How to Watch: UFC 262 Live Stream Chandler vs Oliveira

Rozenstruik has a total of 10 knockouts in his career while Sakai on the other hand has an impressive 11 knockouts out of his 15 matches win.

Rozenstruik will be eager to pull the match earlier in the matchup against Sakai. However, that’s easier said than done as Sakai has a great chin on him. Also, the Brazilian uses his superior cardio to put pressure on his opponents, and ‘Bigi Boy‘ often folds under pressure.

What’s more, as seen in his last fights, Rozenstruik is often hesitant to let his hands go. That can allow Sakai to use his pressure and cage-style mixed with his grappling.

Sakai should be able to overwhelm Rozenstruik and eventually earn a second-round stoppage via ground-and-pound after weathering the early fire.

Sakai was expected to face Shamil Abdurakhimov on May 1, 2022 at UFC on ESPN 23. However Abdurakhimov pulled out of the bout with visa issues, Sakai is set to face Jairzinho Rozenstruik at UFC Fight Night 189.