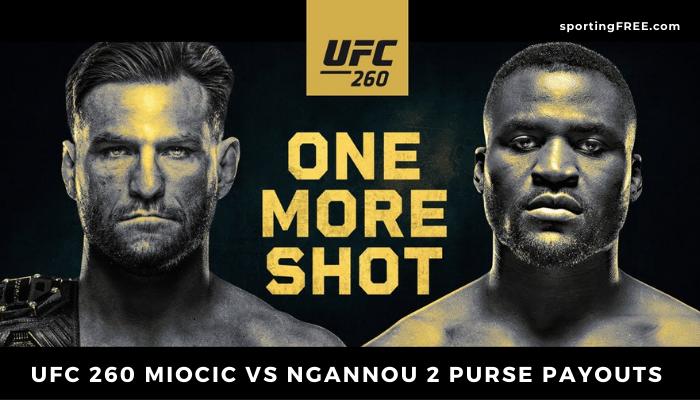 UFC 260 Purse Payouts and Bonuses: The earning of UFC Heavyweight champion Stipe Miocic and Francis Ngannou is out.

The Ultimate Fighting Championship 260 match card is headlined by a rematch between UFC heavyweight champion Stipe Miocic and Francis Ngannou in the main event. Since the day two fighters met in the octagon, Miocic has fought three times ou of which he won twice while Ngannou lost his next fight but bounced back strongly and won his last four bouts via knockout.

In the co-main event of the UFC 260 night, the former welterweight champion Tyron Woodley is taking on Vicente Luque. The other fights in the main card are the bantamweight fight between Sean O’Malley vs Thomas Almeida, while UFC women’s flyweight match between Gillian Robertson vs Miranda Maverick.

The full purse payouts for UFC 260 Miocic vs Ngannou 2 will be confirmed after the event, meanwhile, we’ll try to figure out the probable purse payout for Stipe Miocic and Francis Ngannou based on their recent payouts at UFC.

In the last fight UFC 249, Francis Ngannou defeated Jairzinho Rozenstruik to pocket guaranteed purse money of $260,000 while Miocic defeated Cormier by unanimous decision to retain the Heavyweight championship title at the UFC 252 and claim the purse payout of $750,000 along with $40,000 fight week incentive pay.

It is confirmed that the earnings of both the fighters will increase at UFC 260. Miocic is the defending champion and likely earn more against his opponent on the basis of PPV sales.

Disclaimer: The above information about the UFC 260 Miocic vs Ngannou 2 purse payouts is only an estimate, not official data. The info is based on the analysis, research and reports released by the trusted sources.