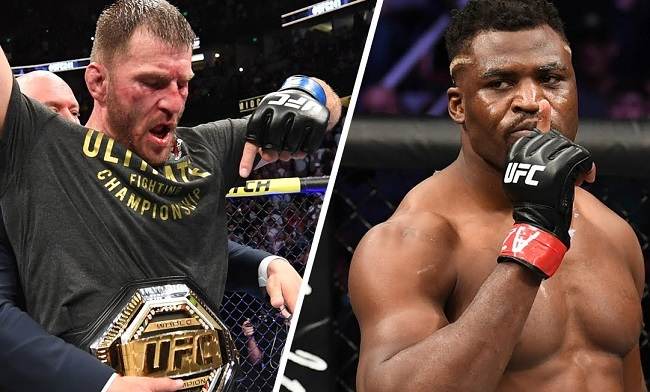 UFC 260: Miocic vs Ngannou 2 Fight card, PPV Price and How to Watch Online or on TV

Where to watch UFC 260 live streaming: Stipe Miocic to make a heavyweight title defence against Francis Ngannou in the rematch on Saturday in the main event, here how to watch Miocic vs Ngannou 2 live stream free.

The UFC 260 at the Apex in Las Vegas is the headline with a baddest rematch between heavyweight champion Stipe Miocic and Francis Ngannou. The fight is scheduled to take place on Saturday night, 27 March 2022. The ESPN+ streaming pay-per-view card in the USA while in the UK, UFC 260: Miocic vs Ngannou 2 live streaming fight is available on BT Sport.

The main event will also feature a Welterweight fight between No.7 ranked Lyron Woodley vs No.10 ranked Vicente Luque live while Sean O’Malley will face Thomas Almeida for the Bantamweight title.

Both Stipe Miocic and Francis Ngannou is looking excited about the UFC heavyweight title match on Saturday night in the main event of UFC 260. The fights are in good form and have improved themselves since the date they met each other. READ ALSO: Miocic vs Ngannou 2 Purse Payout.

Stipe Miocic vs. Francis Ngannou 2 live coverage will kick off with an early prelim match card at 6:15 p.m. ET while the PPV main card begins at 10 p.m. ET. Miocic vs Ngannou live stream fight to begin at around 12:15 a.m. ET.

The MMA fans in the United States who are subscriber of ESPN+ can buy PPV for UFC 260 at price $69.99. The users who are yet to become member of the ESPN+ can buy new ESPN+ subscription along with PPV at $89.98.

The fans in European countries such as Germany, Austria, Italy and Spain have the option to watch UFC 260 live online on DAZN as well as UFC.com.

BT Sport 1 to broadcast the UFC 260 live coverage at 10:15 p.m. GMT and the main card broadcast will start at 3 am in the UK. BT.com will provide the live streaming of the event.

Where to watch UFC 260 live stream in Canada?

TSN5 is the channel to tune for the Miocic vs Ngannou 2 live stream PPV.

Which TV channel will broadcast UFC 260 live telecast in India?

You can watch UFC 260: Miocic vs Ngannou 2 live fight on Sony TEN 2 in English and Sony TEN 3 in the Hindi language in India. UFC 259 online streaming will provide by SonyLIV.