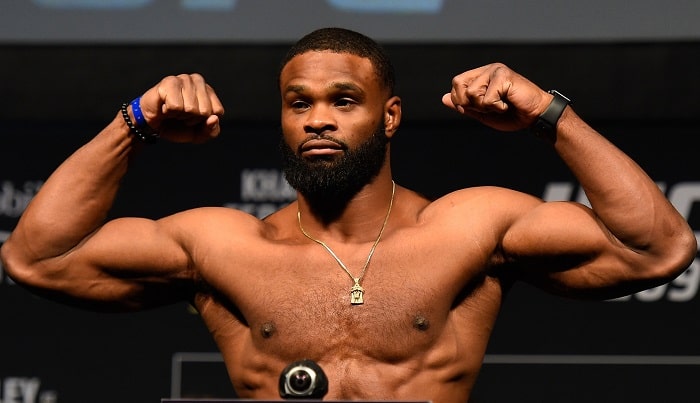 Tyron Woodley is the veteran Ultimate Fight Championship (UFC) fighter. In the year 2022, he decided to retire from UFC and switched to boxing. He will be facing Jake Paul in his first boxing fight. The 39-year-old has a decorated UFC career. During his days in the UFC, he won the welterweight title and successfully defended it for almost 3 years. He earned a lot of money and fame from UFC. The major source of Tryon Woodley’s net worth comes from the fighting and endorsement deals.

Tryon Woodley has also made investments in various fields. The American hosts a podcast and TMZ’s “The Hollywood Beatdown.” Woodley is also paid for media appearances at events.

He made his professional debut in 2009. Tyron faced Steve Schnider and won the fight via submission. Then, he made his Strikeforce debut. Woodley won the debut fight and signed a six-fight deal with Strikeforce. The American made his UFC debut in 2013 against Jay Hieron. He won the fight in the opening 36 seconds via knockout.

On July 30th, 2016, he defeated Robbie Lawler at UFC 201 main event to win the UFC welterweight title and also won the performer of the night award. He successfully defended his title against Stephen Thompson (twice), Demian Maia, and Darren Till. The 39-year-old lost the title to Kamaru Usman at UFC 235.

Tyron Woodley’s next fight is against Jake Paul on August 28, where he is expected to earn a massive purse compared to his previous payouts.