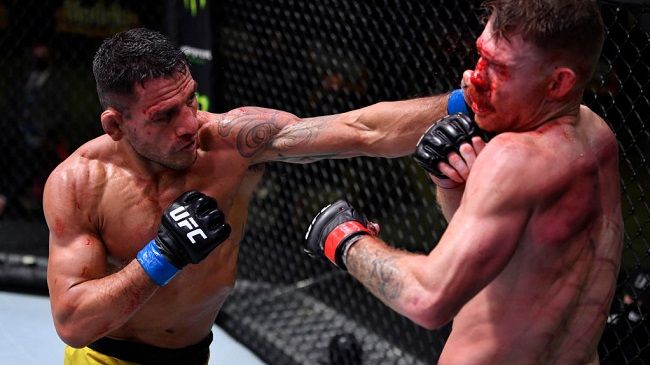 Islam Makhachev was slated to fight with Rafael dos Anjos on November 14th as the Main Card But but Makhachev had to pull out as the Russian tested positive for the Coronavirus, and in place of him, the ‘Irish Dragon’ Paul Felder chose to enter the Octagon on just five days’ notice.

Here’s how it went down both fighters came out guns and slinging with no feeling out process, but the real story of the night was RDA’s wrestling along with his well-balanced attack. He used his high-level striking, backing Felder to the cage using his incredible pressure, continually grinding and looking for the takedown, wearing Felder down.

Both fighters looked very sharp, displaying a super high level of technique, and this was a technical fight to the very end, with every round coming out with a hard pace never slowing down.

Duke Rufus, Felder’s coach, had encouraged the Irish Dragon to have a good round three. And Felder did just that came out swinging again with no rest RDA known for his incredible cardio, knowing Felder came in at short notice, and the third round seemed to turn up the pressure.

RDA started to attack with his wrestling more to begin to damage a short notice Felder finally. Felder, at the end of the fourth, literally is throwing his shots with everything he had. Both warriors kept the pace and made it to five rounds showing incredible heart and unreal endurance from both fighters giving the fans a treat to the end.

However, RDA was just too much. Rafael defeated Paul Felder by split decision, and both fighters earned fight of the night 50 000 bonus, which was very well deserved.

It was a brave choice from the Irish dragon for stepping up on five days’ notice and putting on an incredibly impressive performance, never quitting and leaving every ounce of himself in the Octagon, showing what an incredible warrior is fighting vigorously to the last second of the match. He passionately told commentators Bisping he wasn’t done yet as you could see the fire in his eyes after the fight.

It’s hard not to love the Irish dragon but the real star of the night was RDA making his return to the lightweight division and showing that he genuinely has the hunger to fight for that title once again. RDA fought a brilliant fight with a balanced attack and looked fantastic back at his championship weight at 155.

It can be an advantage or disadvantage fighting a short-notice opponent; you spend your entire training camp preparing for a specific opponent’s style. So when that opponent changes, it can be tricky so that RDA could have easily walked away from this match.

Still, he has never shied away from any fight and displayed what an incredible competitor he is—also showing his hunger to put that gold belt around his waist one more time.

What’s next for Rafael Did Anjos?

Right now, there’s a lot of movement in the lightweight division with Khabib’s retirement, but I’m not sure anyone truly knows how long he will stay retired. RDA told Bisping he wants to face whoever is next in line for that belt. In typical fashion, RDA, respectively, called out the number four ranked Conor McGregor.

Still, it looks like Conor is facing Poirier in January. Maybe the fifth-ranked dan hooker or perhaps the sixth-ranked submission artist in Charles would be a great match up. RDA showed that he is very interested in having a game up with Connor McGregor.

They are the only former champions in the lightweight division, and it would be a highly anticipated matchup for the fans.