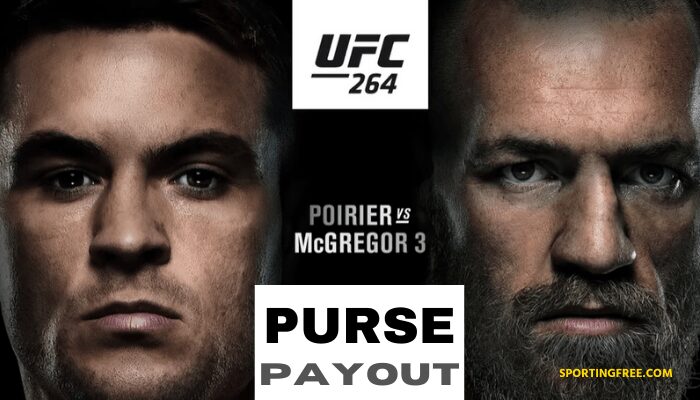 UFC 264 Purse Payouts and Salaries: How much fighters earned from the mega-fight between Conor McGregor vs Dustin Poirier 3?

Many fans would have expected an early finish but not like this. The trilogy between Conor McGregor vs Dustin Poirier came to an end with McGregor break his ankle and lost to Poirier via doctor stoppage. After McGregor’s victory over Poirier in September 2014, Dustin took his revenge in January 2021 with a knockout. Both were level with a 1-1 win before that fight, but now Dustin leading it 2-1 and will face Charles Oliveira for the lightweight world championship. UFC 264 Conor McGregor vs Dustin Poirier 3 purse payouts is revealed based on their fight contracts.

The Irishman and the Diamond look in good shape before the mega-fight shower kicks and punches over the opponent. The highly anticipated trilogy takes place on Saturday, July 10, at the T-Mobile Arena in Las Vegas, Nevada.

Only one fighter will emerge winner at the final fight to become the contender to take on the No.1 ranked Charles Oliveira. But both Dustin Poirier and Conor McGregor walks away with big paychecks at the UFC 264.

It is tough to get the exact figures about the fighters salaries but looking at their previous fights purse and current contract with the promotion, we have revealed how much McGregor Poirier 3 purse could be at the event.

At the UFC 264, Conor McGregor gets guaranteed purse money of $3 million along with the revenue share of the pay-per-view sales, which will increase the overall purse to $10 million.

Dustin Poirier’s purse would be around $1 million, and his total prize money could reach $3 million based on pay-per-view sales revenue which is a career-high for him.

UFC 266 Date, Location, Card, Start Time and Everything You…

The promotion does not officially disclose the Conor McGregor Dustin Poirier purse payouts for the UFC 264. But both fighters will reportedly pocket a much higher payday than any other fighters on Saturday night.

The start time of the McGregor-Poirier fight will depend on the length of the other four fights that are scheduled to take place on the pay-per-view card. UFC 264 pay-per-view event will broadcast on BT Sport Box Office, price start at £19.95. The McGregor-Poirier 3 PPV live stream is available in the U.S. on the ESPN+ streaming service and UFC Fight Pass.

Currently, Poirier’s net worth is around $4 million as of 2021 and expected to increase after the McGregor Poirier 3 purse payouts.

At the same time, McGregor’s net worth is estimated at $200 million, according to reports. His wealth has been increasing significantly after the 2017 boxing match against Floyd Mayweather Jr, which added $100 million to his net worth and the $50 million from the fight against Khabib. At the same time,

Popularity of the NFL in Europe in 2021

5 Best NBA Players from Texas of All Time

5 Best NBA Players from Texas of All Time

5 Best NBA Players with No Championship Ring of All Time

5 Best NBA Players from New Jersey of All Time