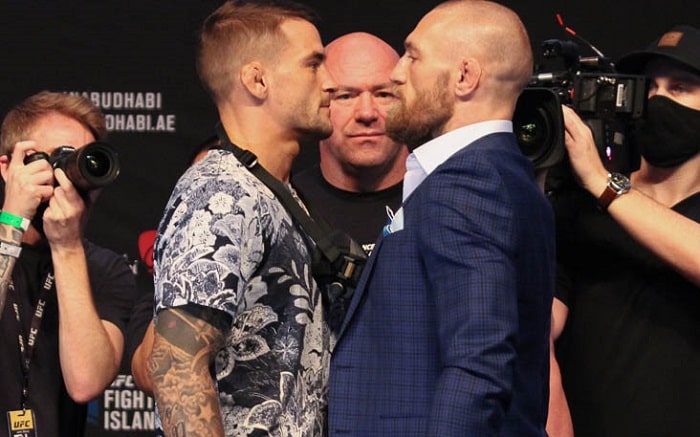 The third fight between Conor McGregor and Dustin Poirier will be taking place at UFC 264 at the T-Mobile Arena in Las Vegas. Both the fighters have won one fight each. In their last encounter at UFC 257, Dustin trounced over McGregor. The Irishman won the first encounter in 2014. With just two days left for the event, the McGregor vs Poirier 3 press conference live stream is set to take place on July 8, 2022 at 5 p.m. PDT (8 p.m. EDT).

When is Conor McGregor vs Dustin Poirier 3 Press Conference?

With everything set for UFC 264, the McGregor vs. Poirier 3 press conference is finally set for today at 8 p.m. ET. In the UK, the press conference can be watched at 1 a.m. on July 9 and 10 a.m in Australia.

The UFC 264 press conference will live stream on ESPN. while UFC fans across the world can watch the McGregor and Poirier face to face event on UFC’s Youtube channel.

McGregor vs Poirier 3 Predictions and Odds

Both Conor McGregor and Dustin Poirier are excellent fighters and are veterans in the UFC. But, by looking at the recent forms of the fighters, Dustin Poirier has the upper hand over Conor McGregor. Dustin has been regularly competing. On the other hand, McGregor has only competed three times in three years.

Various UFC athletes have predicted the winner of the fight. UFC legend Khabib has said that “ Dustin just needs to survive the first round against McGregor to win the fight.” Khabib has beaten both McGregor and Dustin and knows their game very well.

UFC welterweight champion Kamaru Usman also predicted the winner of the fight. In his recent Instagram live, when one person asked him who will win the fight, he said Dustin Poirier would be the winner.

British professional boxer Tyson Fury has predicted McGregor as the winner of the fight. However, he also commented on the ability of Dustin Poirier and said he has lost just once in his last seven fights. It won’t be easy for McGregor.

At betting site 365bet, the odds for both McGregor and Poirier are placed at 1.90. The fight is going to be hell entertaining and once surely cannot afford to miss the decider between Conor McGregor and Dustin Poirier. Both the fighters are set to pocket massive purses at UFC 264.