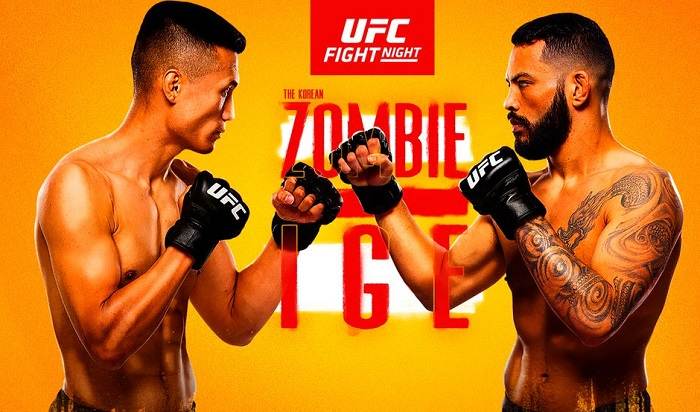 The Korean Zombie vs Ige LIVE: Date, Time and How to Watch UFC Vegas 29 Streaming

The featherweight bout between The Korean Zombie and Ige would be the main event of UFC Fight 29 Vegas. A five-round fight between Chan Sung Jung vs Dan Ige will broadcast live from the UFC Apex in Las Vegas on Saturday, June 19. MMA fans can watch UFC Vegas 29: Korean Zombie vs Ige live stream on ESPN+ and BT Sport.

The mixed martial arts event will be produced by the Ultimate Fight Championship (UFC). 34 years old, Chan Sung Jung is famously known as “ The Korean Zombie “. Currently, he is #4 in the UFC featherweight rankings.

When to watch Zombie vs Ige fight?

The fight between Chan Sung Jung vs Ige will take place on Saturday, 19th June 2022 before the UFC 264: McGregor vs Poirier 3 fight. The Korean Zombie vs Ige fight venue is UFC Apex located at Enterprise, Nevada, United States of America.

How to watch Korean Zombie vs Ige Live Stream?

ESPN+ has the official rights to live stream Korean Zombie vs Ige fight. Fans can watch the entire card on ESPN+. The fight will be available in two languages – English and Spanish.

The viewers in the USA can catch the live action of UFC Vegas 29: Jung vs Ige live on ESPN2 and streaming on ESPN+. Sony Six provide coverage in India while BT holds the broadcasting rights in the UK. In Australia, the Korean Zombie vs Ige fight card is available on ESPN on Kayo.