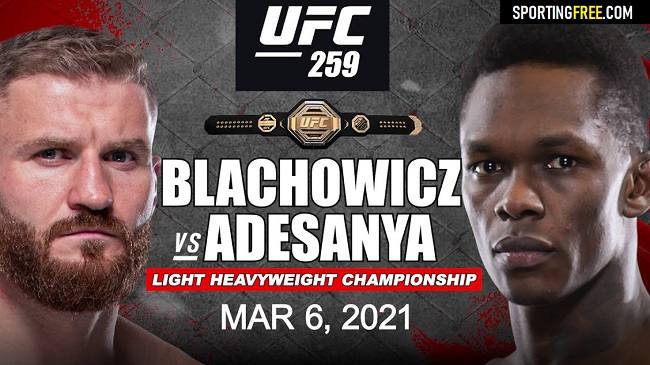 UFC 259 Israel Adesanya vs Jan Blachowicz Fight card, PPV Price and How to Watch Online or on TV

It’s almost time for UFC 259. It is going to be one of the biggest UFC events as there are not one or two titles online, instead, there are three title fights. It is a card of cards, the most exciting fight of the event would be none other than Israel Adesanya vs Jan Blachowicz. Here’s a look at how to watch UFC 259 live telecast and Israel Adesanya vs Jan Blachowicz live stream free online.

Israel Adesanya is UFC middleweight champion. He has moved up and will be aiming for the 2nd UFC title. Jan Balchowicz is the current lightweight champion.

Both players have different game styles. Balchowicz is a monster of a fighter with power as his main attribute, while Adesanya is one of the cleanest strikers of UFC.

Along with their fight, two more title fights I.e. Amanda Nunes will face Megan Anderson to defend her UFC female featherweight crown. Furthermore, Petr Yen will be up against Aljamain Sterling in the bantamweight category.

The UFC 259 is taking place on March 6, 2022, at the UFC Apex facility in Las Vegas, Nevada. What is the start time in the UK, Asia and Australia? let’s see

UFC has signed a broadcasting deal with ESPN this year. So, if you are in the USA and want to watch the event you can watch it on PPV through ESPN Plus. Here are certain ways how you can watch UFC 259 live stream on ESPN.

If you are already a subscriber of ESPN Plus (yearly plan) you can watch the event by paying $70.

If you have ESPN Plus monthly plan then you need to upgrade to a yearly plan and buy UFC PPV for $85. There is another option you can also purchase UFC event PPV for $70 (valid for 1 event only).

The non subscribers can buy the package which includes UFC PPV event and ESPN Plus yearly recurring subscription for $90.

In India, the preliminary card of UFC 259 starts at 6:30 AM, while the main card to begin at 8:30 AM with Sony Ten 2, Sony Ten 3 and the SonyLIV app. User can also catch Israel Adesanya vs Jan Blachowicz live streaming free on Airtel TV and Jio TV.

In the UK you can watch UFC 259 Adesanya vs Blachowicz streaming live on BT Sport. Whereas, in Australia, the live coverage of UFC 259 would be available on Foxtel.

The fight card is basically the list of fights going to happen in a UFC event. So the UFC 259 telecast fight card is