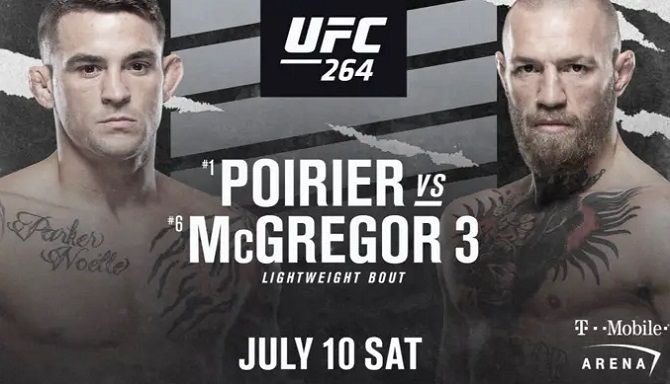 UFC president Dana White confirmed that Conor McGregor will take on Dustin Poirier for the third time at the UFC 264. The venue of the fight will witness full capacity and more than 20,000 are expected to attend the fight. There was a rumour but now it finally confirmed that Poirier vs McGregor trilogy bout is all set for July 2022, here’s Conor McGregor vs Dustin Poirier fight date, time, venue and how to buy McGregor vs Poirier tickets.

The UFC is all set to welcome the fans after hosting many fight nights and pay-per-views in empty arenas and what will be better than McGregor vs Poirier fight.

The venue for the final fight between McGregor vs Poirier is T-Mobile Arena in Las Vegas. The third and final fight date for the two UFC legends is set for 10 July 2022.

In the last fight at UFC 257, Dustin Poirier defeated McGregor after losing the fight at the octagon back at UFC 178 in 2014. Dustin Poirier accuses Conor McGregor of walking away from donating his 500k to America’s Good Fight Foundation charity.

The former UFC champion responded back that he didn’t donate as he was unaware about the usage of money.

How to Buy Conor McGregor vs Dustin Poirier Tickets?

The members of the UFC Fight Club can buy UFC 264 tickets from April 15 at 10 AM PT to April 16 at 12 PM PT. The members will have the first opportunity to get hands-on tickets.

If you want to buy a UFC Fight Club membership then visit the official UFC website and purchase it for $85 which will give you early access to UFC services. Along with the membership, the fans will get a UFC Fight Club t-shirt and Premium Forum emembership.

The pre-sale of UFC 264 tickets will be available for the fans who have registered for the newsletter.