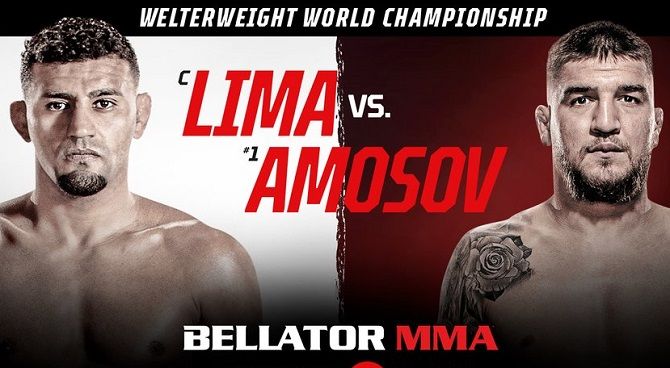 Welterweight champion Douglas Lima will defend his title against Yaroslav Amosov in the main event of Bellator 260. Lima vs Amosov fight is scheduled to take place on Friday, June 11, 2022 at Mohegan Sun Arena in Uncasville, Connecticut. It will be Lima’s first title defence since winning his title back from Rory MacDonald at Bellator 232.

This event will be headlined by a title bout for the Bellator Welterweight World Championship between current titleholder Douglas Lima and undefeated Yaroslav Amosov. It will be the first event in 15 months that will have live fans in the audience.

Here’s everything you need to know about the Bellator 260: Lima vs Amosov fight card including the date, start time, PPV price, location, live streaming channels and betting odds.

When is the Bellator 260: Lima vs Amosov fight?

The fight is taking place at the Mohegan Sun Arena in Uncasville, Connecticut, USA.  The fight night will begin on Friday, June 11 at 9 p.m. ET / 6 p.m. PT.

How to watch Bellator 260: Lima vs Amosov live fight?

The prelims matches will broadcast on CBS and YouTube while the main card will only be available on the above channels.

You can buy cheap Bellator 260 tickets as low as $60 from the Ticketmaster, just sort the price to a minimum. The highest price ticket for the Lima vs Amosov fight is $225.

This will be the first match since Lima failed to become the “champion” in the middleweight battle at the Bella Thor 250 in October 2022 and lost to Gegard Mousasi.

Prior to the defeat, Lima had won three straight fights at 170 pounds, winning the Grand Prix in the process, $1 million and exacting revenge on Rory MacDonald to reclaim his title.

Along the way, Lima also scored a vicious knockout victory over Michael Page, “Venom’s” first and only loss.

As of now, the prediction for the fight is 54% in favour of Amosov to 46% in Lima as the match is in a few weeks. As Amosov is undefeated and it would be hard for Lima to get away with the match so easily.