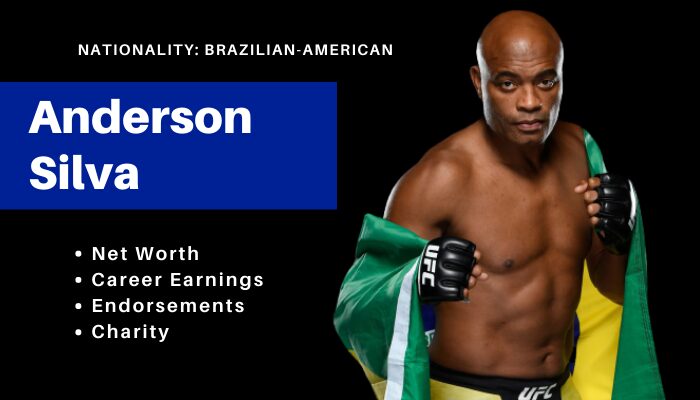 Anderson Silva is a Brazilian-American mixed martial artist. After spending over 15 years at Ultimate Fight Championship (UFC), he switched to professional boxing in 2022. The 46-year-old is one of the greatest fighters in UFC. Popularly known as ‘Spider’, he holds the longest title reign record in the UFC. He was the UFC Middleweight Champion for 2,457 days. UFC revenue is the main source of Anderson Silva’s net worth.

Anderson Silva Net Worth and Earnings

According to sources, Anderson Silva has an estimated net worth of $8 million. The Brazilian-American earns money from boxing, movies and endorsements. He has a total earning of $8,732,000 from UFC. In his last fight at UFC against Uriah Hall, he earned $620,000. During his time at the UFC, he was the fourth highest-paid fighter.

He also earns money through movies. Silva made his cinema debut in 2009. His latest movie was The Invincible Dragon, in which he played the role of an assassin. Furthermore, he is a premier client of 9INE. 9INE is a sports marketing company from Brazil. He earns around $1.2 million from 9INE.

Apart from all these, his other source of income is endorsements. Anderson has been endorsing Burking King, Reebok and Nike. Moreover, he also endorses the Brazilian top division football club, Corinthians.

After making his professional debut in 2007 and impressing everyone with his performance in Brazil, he made his UFC debut in 2006. He made his debut at Ultimate Fight Night 5 on 28 June 2006. Silva faced Chris Leben, who was on a five-fight winning streak and was a probable winner. Against all odds, Anderson knocked out Leben in just 49 seconds to win the fight.

Chris Weidman ended Silva’s title streak. He defeated Silva by a second-round knockout. Silva’s career took a sharp turn after he was injured in quick succession. He failed to get back to his usual best. In 2022, Silva and UFC parted ways. Silva decided to continue his combat career and switched to boxing. He won his first professional bout against Julio César Chávez Jr. via split decision,