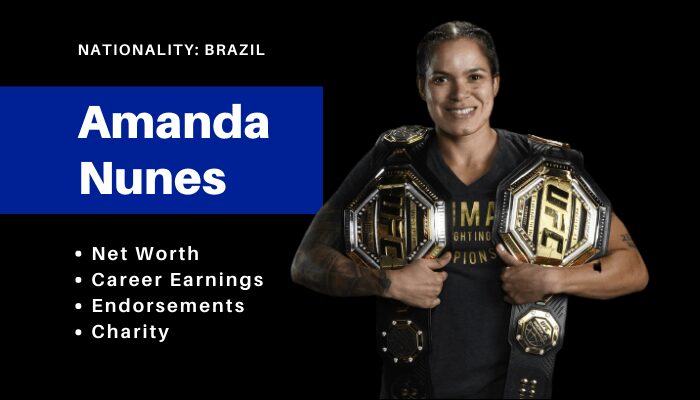 Amanda Nunes is a mixed martial arts professional. The Brazilian competes in the Ultimate Fight Championship (UFC) in the featherweight and bantamweight divisions. Amanda is one of the best female fighters in the UFC with a net worth of $4 million. Nunes is currently the champion holder of the featherweight and bantamweight divisions.

She started her MMA career in 2008. However, she lost her first-ever professional fight, but she didn’t give up and became one of the best in sports. Amanda made her UFC debut in 2013 against t Sheila Gaff at UFC 163 on August 3, 2013, in Brazil.

Nunes dominated and won by first-round TKO. She got her first title shot in the year 2016. Amanda faced Miesha Tate for the UFC Women’s Bantamweight Championship at UFC 200. The 32 years won the fight by submission and became the first gay champion in the Ultimate Fight Championship (UFC) history.

In 2018 at UFC 232, she moved up a division to face Cris Cyborg for the UFC Women’s Featherweight Championship. She won the title fight with just 51 seconds on the clock and became the first woman in UFC history to hold titles in different divisions simultaneously.

She has defended her title successfully on several occasions. She holds the record of most wins in UFC title fights.

Till now, she has won seven title fights. The Brazilian also won five performers of the night awards in UFC. She is expected to defend her bantamweight title against Julianna Peña at UFC 265.

Amanda Nunes Net Worth and Salary

Amanda has been one of the most dominant female fighters in UFC. As per the sources, Amanda Nunes’ net worth is estimated to be $4 million. Her major source of earning is UFC. She has won a total of $3,197,500 in her Ultimate Fight Championship (UFC) career.

In her fourth bantamweight title defence, she faced Holly Holm. Amanda got the highest earning from a single fight. She successfully defined the title and took home a sum of $590,000.

The Brazilian also earns money through endorsements. Amanda Nunes endorses several brands. A few of them are TEN Spring Water and Reebok.