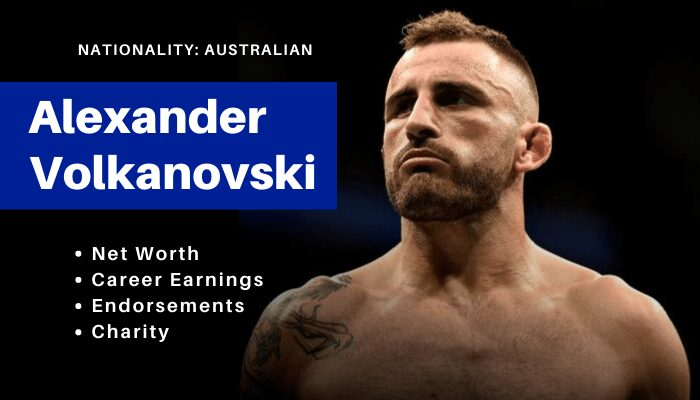 The Australian international Alexander Volkanovski is a mixed martial art professional. He competes in the featherweight division in Ultimate Fight Championship (UFC). Alexander is the current UFC featherweight champion. Currently, he is #4 in the UFC men’s pound for pound rankings. The UFC star Alexander Volkanvoski has a net worth of $2 million.

He has also made his professional boxing debut against Dillon Bargeron. Alexander won the fight by unanimous decision. Here are all the details about Alexander Volkanovski career, record, net worth, salary and endorsements.

Volkanovski got wrestling training during his childhood. This helped him when he started his MMA training at the age of 22. He made his MMA debut aged 23 against Gerhard Voigt at Revolution Promotions. Next, he moved to the Australian Fighting Championship (AFC).

After earning huge success at AFC, he finally made his UFC debut in 2016. In his debut fight at the Ultimate Fight Championship, he faced Yusuke Kasuya and won by knockout.

After winning numerous fights, he finally got the title shot against former champion Max Holloway. Before the fight, Holloway was the favourite to win the fight. However, Alexander won the UFC featherweight title and fought by unanimous decision. They once again meet in a rematch at UFC 251. The fight ended on a controversial note.

Alexander won the fight as judges decided in his favour, but many people thought the opposite. Alexander Volkanovski will face Brian Ortega at UFC 266 for the UFC Featherweight Championship in his next fight.

According to reports, Alexander Volkanovski net worth is $2 million (approximately). Alexander has earned over $1,224,500 in his UFC career. His highest earning for a fight was against his rematch at UFC 251. He took home a whopping sum of $400,000.

The earnings from his first UFC fight was $ 22500. No doubt, the Australian has made his place in the UFC and became one of the top earners. The 32-year-old also earns from endorsements. At present, he has a deal signed with brands such as CMBT and Blessed CBD.