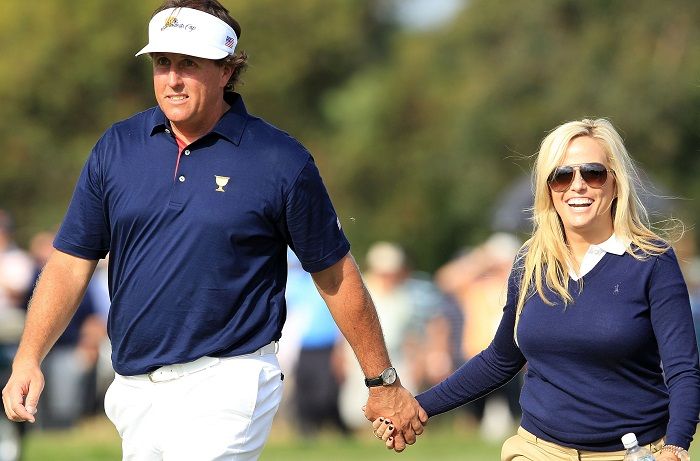 Who is Phil Mickelson’s wife, Amy Mickelson? All We Know About Her

Phil Mickelson, aka Lefty, is an American pro golfer born on 16 June 1970 who dominated the PGA Tour in the 1990s and early 2000s. In the Official World Golf Ranking, he has been on number 2 rank numerous times. At the age of 52, the American won the PGA Championship and made him the oldest person to win a major.

Phil Mickelson’s wife, Amy has been a major part of his golf career. Since 1996 Phil married his sweetheart Amy. Let’s know everything about Lefty’s wife, Amy Mickelson.

Amy and Phil both attended Arizona State University in college. At the same time, Phil was in senior year. Amy was just a junior; she was a cheerleader of the Phoenix Suns.

When Phil first introduced himself he told Amy that he is a professional golfer, which she misunderstood as he worked at a golf shop.

In 1992 the couple started dating and had their first date on a tennis court. Phil and Amy have been together for 29 years now.

The couple got married in 1996 after 4 years of being together. And now resides in South Florida after staying for years in California.

The Match 4 Purse Payouts: How much money will Tom Brady,…

READ: Patrick Mahomes’ wife Brittany Matthews: All We Know About the Couple

Amy was diagnosed with breast cancer in 2009 and so Phil has stopped taking part in the PGA Tour to take care of her. After 11 months of struggling, Amy won the cancer battle and was recovering back to good health.

Phil Mickelson’s wife is now extensively involved in fundraising for breast cancer research after her diagnosis. She attended the 2010 Masters, her first golf tournament after fighting cancer, where Phil won his third Green Jacket.

The couple has three children together. After three years of marriage, Amy and Phil welcomed their first daughter, Amanda. She was born one day after Phil finished second at the 1999 US Open.