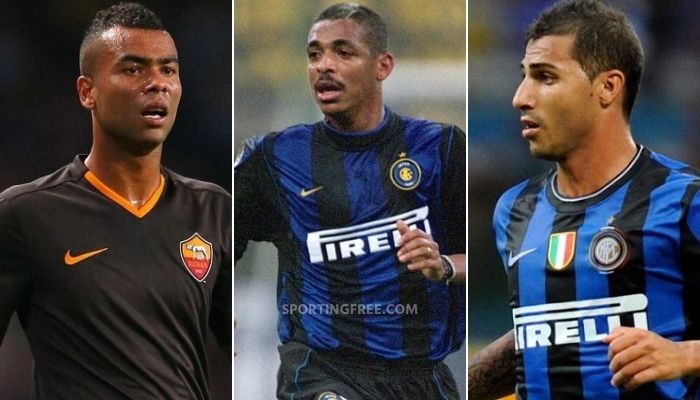 Serie A is one of the most exciting and historic leagues across Europe. The top tier Italian League features some of the greatest teams in the world. Serie A attracts many players every year, and many legendary players have played in the league. But not all players who have played in Serie A had a good time, here’s a list of players who failed to perform in Italy’s top league.

A surprising name in this list is that of Vidic. The Serbian international went from being a Manchester United legend to an outcast in Italy. After his long spell with the red devils, Nemanja Vidic joined Italian giants Inter Milan in 2014. Vidic had a disappointing stint with the clubs as he became out of favour and was benched by the then manager Roberto Mancini. Vidic announced his retirement after playing for Inter.

Ashley Cole had the worst stint of his career when he played in Serie A. After an illustrious career with Chelsea, the defender joined AS Roma in 2014. A disastrous spell in Italy saw Ashley Cole make just 11 in two years appearances for Roma. Cole went on to play in the MLS after his forgettable spell in Serie A

Jose Mari joined AC Milan from Sevilla in 2000. The forward was signed for a record fee of €19 million but failed to prove his worth at the biggest club in Italy at that time. The Spaniard scored just 5 goals in three seasons with Milan and was often found on the bench.

After glorious years at Bayern Munchen and Arsenal, Podolski joined Inter Milan on loan in 2015. Podolski recorded a humiliating season in Italy as he was voted as one of the worst signings of Serie A that season. He failed to perform with the Nerazzuri and managed to score just 1 goal in his season.

Another player to have an unsuccessful trip from England to Italy was Micah Richards. The Manchester City defender joined Fiorentina on a loan spell in 2014. Richards failed to get the desired game time and had an overall disappointing spell in the Serie A.

READ: The 10 Worst Signings of All Time (Football Transfers)

O Brien caught the news when Juventus signed him in 1999. The bizarre transfer saw the Irish mango from Middlesbrough to the Old Lady. Clearly, O Brien wasn’t a player of Juve’s quality and ended up without playing a single match for Bianconeri in his five-year spell as he was loaned out for all the years.

Federico ‘Kiko’ Macheda had a fairytale beginning to his career when he flourished as a teenager for Manchester United and scored the title-winning goal of the 2008/09 season. Despite his earlier heroics, Macheda was loaned to his home country Italy where he played for Sampdoria. This began the downfall of his career as he failed to impress and became a flop.

AC Milan signed Digao in 2005. A teenager back then, the Brazilian failed to live up to his expectations as he was sent on to loan for most of his career. Unlike his brother Kaka, who became a Milan legend, Diageo’s career slumped downwards.

Inter Milan signed Quaresma from Porto in 2008. The Portuguese superstar was expected to perform wonders for Inter but instead ended up as one of the worst players of Serie A. He managed to score just 1 goal and ended up receiving the unwanted Bidone d’Or, Golden Bin award.

Vampeta is termed as the worst player of Serie A history by many. The Brazilian had a poor attitude and was unaware of Inter Milan’s manager when they signed him in 2000. Needless to say, Vampeta had a concise career with Inter and was immediately loaned out to various clubs.