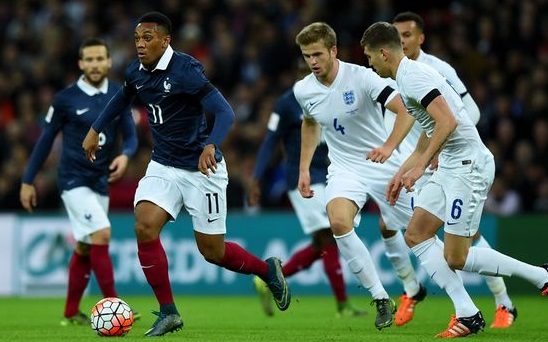 2021 is all set to welcome its first international tournament, Euros 2022 featuring twenty-four football teams. The tournament is all set to give the fans a thrilling experience as the matches will be held at different venues. With so many top teams of Europe participating, we look at the favourites to win the Euros 2022.

France is without a doubt the most favourite to lift the trophy alongside Italy and England. Les Bleus have the best squad in the entire tournament. Didier Deschamps’ side is boosted by the recall of star striker Karim Benzema.

He joins the roster of the star-studded lineup which includes Kylian Mbappe, Paul Pogba, N’Golo Kante, Antoine Griezmann and Raphael Varane. France was the runner up in the previous edition of Euros.

They followed their sizzling form by winning the FIFA World Cup in 2018. With such a prolific international form, world champions France is also the favourite to win Euros 2022 with 5/1 odds.

Experts and pundits have predicted England as one of the most probable contenders to lift the trophy. The Three Lions have one of the youngest and most talented squads in the tournament.

Combine that with England’s improved performances in recent international competitions and Gareth Southgate’s side is the most favourite to win Euros 2022.

A major boosting factor for England is that the final will be played at Wembley Stadium in London and the Three Lions have a fantastic opportunity to satisfy the fans by winning it in front of them.

England will be led by their talismanic striker and captain Harry Kane. England has 5/1 odds of winning Euros 2022.

Germany will try to bring its lost pride back after a few disastrous and disappointing international campaigns. Return of key marquee players like Thomas Muller and Matts Hummels alongside rising young players like Serge Gnabry, Kai Havertz will give the Germans some hope for the tournament. The three time Euro winners have 7/1 odds of winning the current tournament.

Spain is at 7/1 odds of winning the Euros 2022. Such is the depth of the current Spanish squad that Manager Luis Enrique decided to go on this international campaign without their captain and most valuable player, Sergio Ramos. Spain will be keen to become the first team to win this tournament four times and become the most successful team in the tournament’s history after previously winning it for two successive editions in 2008 and 2012.

The current Belgian side is regarded as the Golden generation in the history of Belgian football. Supported by world-class players like Romelu Lukaku, Kevin De Bruyne, Eden Hazard, Thibaut Courtois, Axel Witsel.

The Red Devils have 6/1 odds of winning the Euros 2022. Roberto Martinez’s team enter the Euros on the back of an impressive World Cup 2018 campaign where they finished as the semifinalist.

Portugal has 8/1 odds of winning the Euros 2022. The main reason attributed to their chances of winning the tournament is the great balance of young talents and experienced campaigners.

The defending Champions have some of the most experienced players in their lineup including their in-form 36-year-old leader Cristiano Ronaldo, 38-year-old Pepe and 37-year-old Jose Fonte.

Some of the world’s top youngsters like Joao Felix, Bernardo Silva, Diogo Jota, Ruben Dias are some of the many youngsters that will feature in Euro 2022.

Italy and Netherlands are certainly the underdogs in the Euros 2022. The Italians had a disappointing Euro 2016 and their interna1tional form dipped to a new low as they failed to qualify for the 2018 World cup.

On the other hand, Netherlands completely missed out on both, the Euros 2016 and the World cup in 2018. But both the teams have regained their form and have qualified for the Euros 2022.

The Netherlands will be the one to watch for in the Euros with a young squad full of talented players. The Dutch have world class players like Memphis Depay, Mathijs de Light, Frenkie de Jong, Gini Wijnaldum in their squad. The Netherlands has 12/1 odds to win the tournament.

Italy has definitely put its poor form behind as the Azzurri’s maintained a clean run of 10 wins from 10 games to get qualified for the Euros. Roberto Mancini has transformed the side by bringing up young talented players. Italy has 11/1 odds of winning Euros 2022.