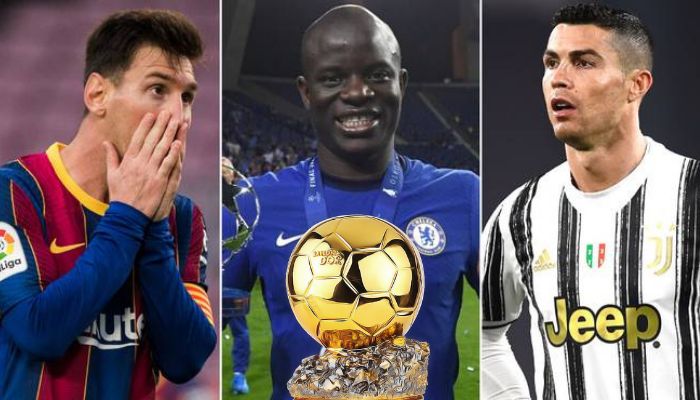 N’Golo Kante to Kylian Mbappe, Lionel Messi to Cristiano Ronaldo who are favourites to win the Ballon d’Or 2023? Find the Predictions and Odds.

All domestic leagues and European competitions have started for the 2023-22 season. There are many contenders for the Ballon D’Or 2023 award. N’Golo Kante helped Chelsea to win the Champions League with his match-winning performance on the pitch as he outshined everyone in the final. Messi stellar performances and successfully winning Copa America made him the fan favourite to win the Ballon d’Or 2023 award.

Ballon D’Or is the most prestigious individual award that a football player can win. In recent years, the award is dominated by the two best players in the history of football, Lionel Messi and Cristiano Ronaldo. The legendary duo has won the award 11 times between them in the last 12 years. Messi has won it 6 times, whereas Ronaldo has won it 5 times.

Ballon D’Or 2023 was cancelled because of the pandemic, which meant that Bayern Munich striker Robert Lewandowski, a clear favourite to win the 2023 award, missed out on it. This year, the Polish striker is the frontrunner to win Ballon D’Or 2023 alongside PSG’s star forward Kylian Mbappe.

After a successful season that saw him lift the Champions League 2023, Chelsea midfielder Kante has joined the list of contenders for Ballon d’Or 2023. Marvellous Champions League campaign, which saw the Frenchman win three consecutive Player of the match awards;  two in both legs of the semi-final against Real Madrid and the Final against Manchester City, means that Kante is running ahead of both Messi and Ronaldo in the award race. If he wins the Euro 2023 with France, Kante will be the favourite for Ballon d’Or.

Here is the list of all the possible candidates for the 2023 Ballon d’Or award.

Lewandowski is most likely to win the Ballon d’Or 2023 award after being robbed off in 2023. The Bayern Munich striker had a record-breaking season as he scored 41 goals in the Bundesliga, breaking Gerd Muller’s record. The polish striker won the Bundesliga 2023/21 title with the Bavarians.

Kylian Mbappe won the French super Cup with Paris Saint Germain and is the top goal scorer of Ligue 1 2023/21 with 27 goals.

Lionel Messi was La Liga’s top scorer with 30 goals and had 9 assists to his name. He won the Copa del Rey with Barcelona.

Cristiano Ronaldo is Serie, A top goalscorer with 29 goals. He won the Italian Super Cup and Copa Italia with Juventus.