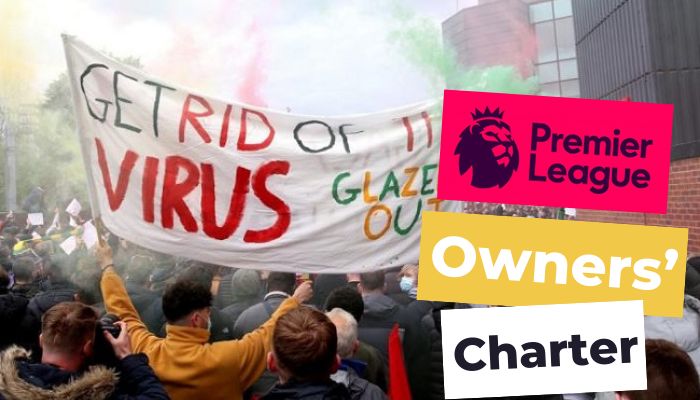 The Premier League is preparing to introduce new rules, including an owners’ charter, to avoid another occurrence of European Super League (ESL) or any such breakaway leagues in the future. Here’s everything you need to know about the Premier League Owner’s charter and why is it being introduced by the English league.

The announcement of the formation of the European super league wreaked havoc all over the world. The English Premier League fans were not left behind when it came down to voice their discontent.

Fans of all six clubs that initially were a part of ESL took a stand against the decision by protesting outside the respective stadiums. Their efforts were successful as all the six clubs withdrew from the Super League within 48 hours of joining.

On Sunday, the protests reached a boiling point as Manchester United’s clash with Liverpool was suspended after United’s fans marched onto the pitch at Old Trafford stadium to take a stand against the club’s owners, the Glazer family. This disrupted the functioning of the Premier League and resulted in criminal acts of violence.

What is the Premier League Owner’s Charter?

To avoid any such incidents in the future, Premier league announced a set of new rules. The Premier League will introduce Owners’ Charter that will make sure that the integrity and principles of the league are protected and breakaway leagues cannot be formed in the future.

All club owners will be required to sign the charter and commit to the core principles of the Premier League and breaches of the charter will lead to the imposition of heavy sanctions.

A statement released by Premier League stated – “The actions of a few clubs cannot be allowed to create such division and disruption. We are determined to establish the truth about what happened and hold these clubs accountable for their decisions and actions. We and the FA pursue these goals quickly and appropriately, and consult with fans and the government.”

The Italian Football Federation (FIGC) has already approved the creation of a new ‘anti-Super League’ rule, which will debar the Serie A clubs involved in the ESL from participating in domestic competitions.

La Liga said it was not imposing any sanctions yet on FC Barcelona, ​​Real Madrid or Atletico Madrid.