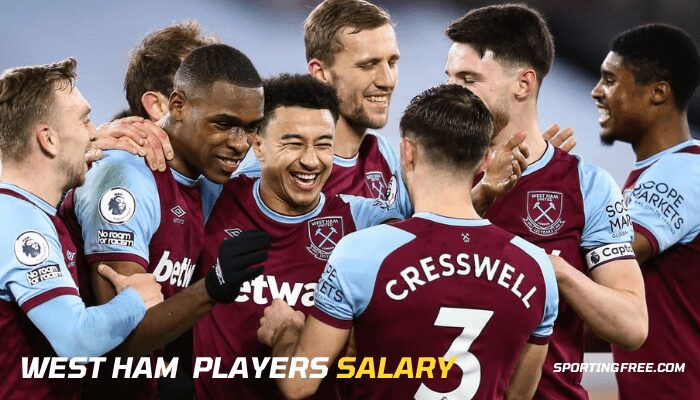 The 2023-22 Premier League is set to start, let us look at West Ham United player wages.

West Ham had a season to remember, the 2023-21 season has made the fans proud of their club. The Hammers finished in 6th place and made it into the Europa League along with Leicester City. The manager and players did an amazing job and deserved credit for that. With the transfer still open, let us look at West Ham players salaries and wages.

West Ham Players Wages 2023-22: How much salary does a West Ham player earn?

The value of many players increased after their performance in the previous season. Top clubs across Europe even target some. Let us look at the highest earners at West Ham.

Jared Bowen is next up in the list, earning reportedly 96k Euros per week. Bowen has been one of their best players, and the club expects good performances from him.

Felipe Anderson, the 28-year-old forward earns 85k Euros with The Hammers. This makes him the 3rd highest earner at the club.

Michail Antonio and Lanzini complete the top 5 earners at West Ham, with a salary of 70k Euros. Ogbonna and Reid also have the same salary.

8 Reasons Why Arsenal Will Not Collapse After the World Cup

Pablo Fornals, Thomas Soucek and Issa Diop all are on the same wage, earning around 67k Euros. Soucek and Fornals were the keys to West Ham’s success last season.

Declan Rice is one of the lowest earners, but he will probably be one of the highest earners if he continues with The Hammers.

David Moyes added Jesse Lingard to the squad in the winter transfer window, on loan and what a decision turned out to be. Lingard’s future is with Manchester United, to sell/loan or keep him.

Read More On Football: CONCACAF Gold Cup Live Stream: How To Watch In Your Country?

Craig Dawson is a confirmed addition for next season, while Balbuena leaves for free to join Dynamo Moscow. Before the season starts, David Moyes is looking to strengthen his squad. Hammers are linked with Areola in goal and Giovanni Simeone in the attack. Glen Kamara is a name that will excite the fans, his arrival can boost West Ham.

To bring in new arrivals, Hammers have to reduce their wage bill and offload few players. Felipe Anderson, one of the highest earners, is rumoured to join Lazio. Another big player, Yarmolenko, is linked with Galatasaray, but the rumours are not yet strong. Declan Rice is one of the players who will probably be joining Chelsea, and the transfer looks imminent.

I hope you like the article on West Ham players wages and the transfers. Will The Hammers perform better than last season? comment down below.