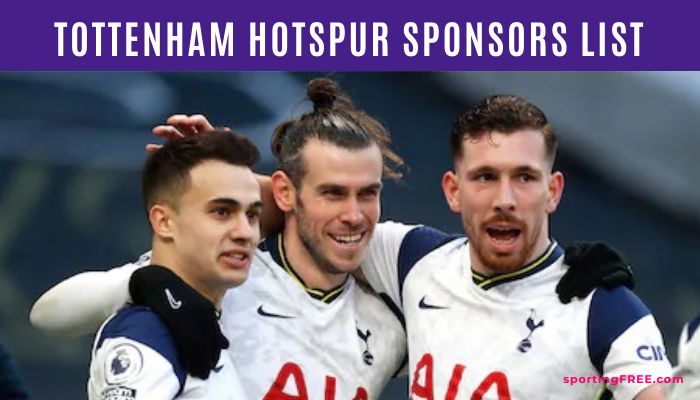 Tottenham Hotspurs are one of the big horses of the English Premier League. The club has a rich history of more than 100 years. Modern football involves huge money as clubs spend millions on players. The major portion of clubs revenue is from sponsorships. Here is the list of Tottenham Hotspur sponsors and official partners.

AIA is a Hong Kong based life insurance company. It signed its first deal with Tottenham Hotspurs in 2013. In 2019, on mutual agreement the deal was extended for 8 seasons more with $49.5 million for each year extension.

As a part of the AIA logo is present on the front of match day kits.

Nike became a Tottenham Hotspur kit sponsor in 2017. Just after two years both the parties decided and signed a bumper deal for 15 seasons. The new deal is until 2033 and worth $38 million yearly.

Spurs roped in HSBC as their official baking partners at London and Hong Kong in 2019. HSBC played a major role in construction of Spurs’ new stadium.

William Hill is a betting firm based in London. It has been Spurs official partners since 2016. William Hill sevres as the club’s official betting partner in Australia and Europe.

Asian betting firm FUN88 first signed a deal with Tottenham Hotspurs in 2011-12. Then, since 2016 it has served as Spurs official betting partner in Latin America and Asia.

Hewlett Packard Enterprise is a American IT company. It was signed as Tottenham’s official IT partner before the construction of their home ground.

Betway is Spurs official betting partner in Africa. As a part of the deal, Bateau advertising is done on the Spurs digital platforms.

Audi has been Tottenham Hotspurs official car partner since 2018. Audi is a German automobile company.

Libertex is an international trading platform. It is Supra’s official trading partner. The deals mandates Libertex advertisements inside the Tottenham Hotspurs stadium.

In 2018 Heineken became Tottenham Hotspur sponsor as its official beer partner. Some of the Heineken products are easily available inside Spurs new stadium.

The American based energy drink company Monster Energy is Tottenham Hotspurs official energy drink partner. The deal was signed in 2019.

South Korean tyre company Kumho Tyre signed a deal with spurs in 2016 and became it’s official Tyre partner. For Spurs the deal was a way to expand its reach in South Korea.

EA Sports is Tottenham Hotspurs official gaming partner. The deal between the two was signed in 2012. EA every year launches a special FIFA edition for Spurs.

Hotels.com is a the Spurs official accomodation partner since 2018. The accommodation facility of players during travelling fixtures is managed by Hotels.com

Last year Spurs signed a deal with Mondelez Food Group and roped in Cadbury as it’s official snack partner. According to deal signed, both parties will work toward fans engagement.

The German fashion brand is the official Tottenham Hotspur sponsor as formal wear partner. Boss design and provided the first team and management staff with the outfit of matchdays.