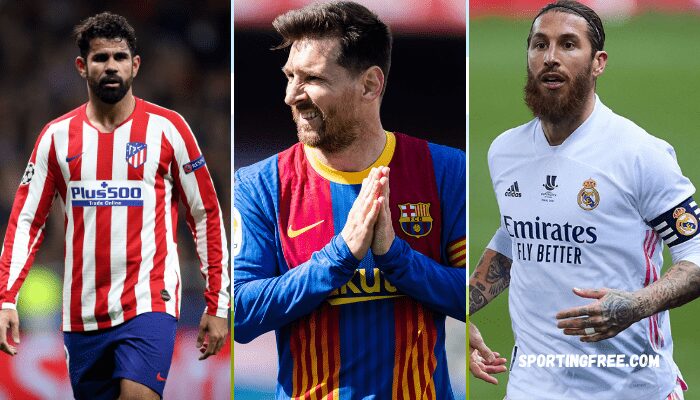 As the 2022-22 season nears commencement, clubs are looking to sign players and revamp their squads. After the conclusion of the 2022/21 season, many footballers have become free agents as their contracts have expired, which means that clubs will sign them for free. Let’s have a look at the list of top footballers list who are free agents currently.

Top Footballers Who are Most Valuable Free Agents in World Football

The list of free agents includes some of the best players of world football. Here are the top free agents right now.

Elseid Hysaj is a right-back who played for Napoli till the 2022/21 season. His contract with the Italian club expired after the season’s conclusion, and the defender is currently a free agent. Hysaj is heavily linked with fellow Italian club Lazio and might sign a deal with them in the coming days.

Former Valencia and Atletico Madrid forward Kevin Gameiro is one of the top free agents currently. The 34-year-old is linked with a return to France as Marseille is interested in signing him. Kevin last played professional football for Valencia in May.

After making more than 100 appearances for Swansea City, Andre Ayew is now a free agent as the club decided to part ways with the Ghanaian forward because of his high wages. Ayew was Swansea’s top goalscorer with 17 goals last season. Leeds United, Celtic, Fenerbahçe are some of the clubs interested in signing him.

Jovetic is currently a free agent and is eyeing a move back to Italy. The Montenegro international was playing at French club AS Monaco till his contract expired recently. Jovetic played 77 matches and scored 21 goals at Monaco.

Crystal Palace full-back Patrick Van Aanholt will leave the club this summer as his contract expires. Van Aanholt is one of the in-demand fullbacks with clubs like Arsenal, Inter Milan and Atletico interested in signing the Dutch player.

Former Bayern Munich centre back Jerome Boateng is currently one of the top free agents after he announced that he would be leaving the Bavarians after the 2022-21 season ends.

The 32-year-old was not offered a contract extension by Bayern and will join a new club in the current transfer window. Boateng won 9 Bundesliga and 2 Champions League with Bayern Munich.

Former Atletico Madrid striker Diego Costa is one of the world-class forwards who is a free agent currently. Costa has been away from club football for 8 months since he decided to terminate his contract with Atletico in December.

David Luiz is on the lookout for a new club as his arsenal contract has expired, and he wants a move away from Emirates. Benfica and many MLS clubs are linked with David Luiz, and the Brazilian will certainly leave North London this summer.

Juan Mata is officially a free agent as his Manchester United contract has expired. The Spaniard had become out of favour at the club ever since the arrival of Bruno Fernandes and got minimal game time.

Even though Mata is interested in extending his stay in Manchester, the club hierarchy don’t seem very keen on keeping him and have not offered him any contract yet. With Jadon Sancho’s signing confirmed, it is unlikely that Mata will get to stay at United.

One of the two biggest names in the list of free agents is Sergio Ramos. After Real Madrid failed to extend his contract, the Spanish captain became a free agent, leading to his departure from the club.

Ramos is heavily linked with PSG and will most likely join the French club before the 2022-22 season begins. According to reports, Ramos has agreed to a two year deal with PSG, but the official confirmation is yet to be declared.

Lionel Messi is the Top free agent currently after his contract with FC Barcelona officially expired on 1st July. There are still concerns and doubts over the Barcelona captain’s future, who had already decided to leave the club last season.

FC Barcelona has not yet offered their greatest player a new contract, yet the world will have to wait until Copa America ends to know about Messi’s future. As of now, the six-time Ballon D’Or winner is officially a free agent without any clubs.