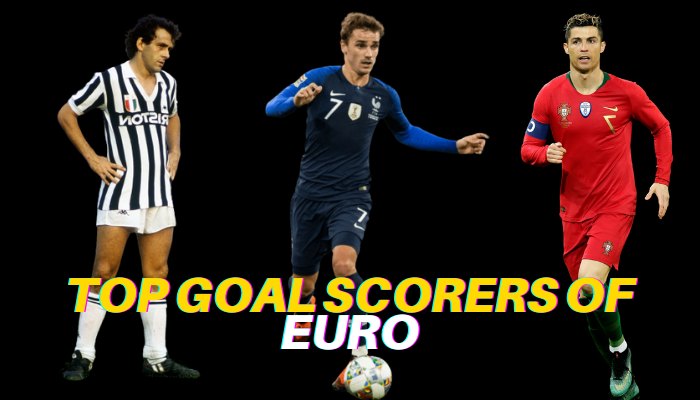 Being one of the best tournaments in the world means that some of the worlds greatest talents get to feature in the tournament.

In the due course of the Euros’ history, Euro has witnessed some of the finest talents and legendary players take the field. The list includes Euros top goalscorers with at least 5 goals at the European championship.

Who scored the most goals in a single European Championship tournament?

Michel Platini is the highest goal scorer in the history of the European Championships. Platini has scored the most goals in a single tournament. The most fascinating part about the Frenchman’s record is that Platini has featured in just one European championship, in 1984 and scored 9 goals in just five matches and helped France to win the title.

The French team scored 14 goals in the entire tournament out of which 9 were scored by Platini. The three-time Ballon D’Or winner averaged 1.80 goals per game in the tournament.

Who is the highest goal scorer in European Championships?

Cristiano Ronaldo is the joint highest goal scorer in Euros with 9 goals. He ranks second as he has played more matches than Platini. The Portuguese forward has featured in four editions of the tournament to date – 2004, 2008, 2012, 2016 and is all set to feature for the 5th time in the 2022 Euros.

Ronaldo captained Portugal and inspired them to win the Euros 2016. Ronaldo needs just one goal to overtake Platini and become the tournament’s highest goal scorer. All eyes will be on the 5 times Ballon D’Or winner during Euro 2022.

Alan Shearer is the third-highest goalscorer in the competition’s history. The former England striker has featured in two editions of the European Championship in 1992 and 1996. He has played 9 matches overall and has managed to score 7 times with an average of 0.78 goals per match. Shearer was the top goal scorer of the 1996 European Championship with 5 goals.

Antoine Griezmann is the 4th highest goal scorer in Euros. The French forward has played just one European Championship to date which was in 2016.

Griezmann had an amazing campaign in 2016 where he was the tournament’s highest goal scorer with 6 goals in just 7 matches averaging 0.86 goals per game.

The 30-year-old will feature in the upcoming campaign of Euros 2022 and has a great opportunity to rise up the ranks in the top scorer’s list.

Ruud van Nistelrooy has featured twice in European championships; 2004 and 2008. The Dutchman scored 6 goals in 8 games with an average of 0.75 goals per match. Van Nistelrooy is the fifth highest goal scorer in the history of the European Championships.