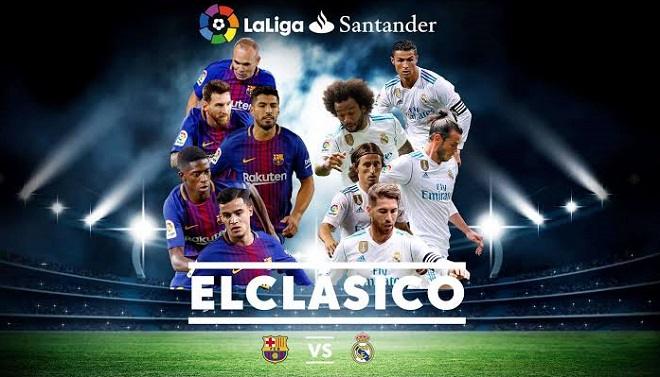 El Clasico Fights of All Time- Goals, fouls, fights, dives and red cards: El Clásico is one of the biggest Rivalry Match between two Spanish teams Barcelona and Real Madrid. This is one of the biggest Rivalry in the Sports World, and its roots began in the early 1920s as we all know that Rivalry Matches are crucial for the Respective teams as it’s a matter of pride and none of the team would want a draw but a sure Victory. The roots of this Rivalry is long back in the 19th Century where Real Madrid embraced Spanish Nationalism.

Whereas Barcelona had a strong Catalan Nationalism approach ever since they were formed, which were the origin of the Valencian culture. The Game today is considered as the most exciting ”Ronaldo vs Messi” Clash. The top 2 best footballers in the World to Face each other. But can they play with Calmness? The Match heats up, and with the Heat of the Moment, fights do occur. Let’s take a look at the top 5 El Clasico fights of all time.

The game was on as usual, and the Magic feet of Messi was dribbling on the pitch at the Right-wing where Arbeloa came and tackled out the ball and Slapped Messi not hard but gently on his cheeks. Thereby came Xabi Alonso and Keeps his hand on Messi’s Cheek in a dominating attitude. The Spanish newspaper Marca reported that Messi also confronted Real assistant manager Aitor Karanka saying Shut up. You’re just Mourinho’s puppet.”

20 April 2011 When this epic Fight of the El Clasico happened. A looping ball forward for David Villa on the wings and the Real Madrid Left-back coming in the Picture once again. However, Arbeloa cleanly tackles the Ball out of play but as he stands up from the Challenge. He literally, on purpose, stamps David Villa. As Villa is hurt and moans, Arbeloa harshly picks him up. The whole Barca dugout comes on the pitch, and the match was almost turned into Rugby Match.

Once again, the Powerhouse Messi dribbling the ball on the Opposition half, and the Three defenders surround Messi. While Ramos comes from behind and Loudly hits Messi’s Leg with a bang. He was red-carded for this incident as All the Barca players came shouting on at Ramos. All Spanish Teammates and Ramas push off Puyol’s face in Frustration. He also pushed Xavi during the Sent-off

The El Clasico match was on with Cesc Fabregas build up in the Midfield region. Suddenly a Harsh tackle from the Brazillian Left Back Marcelo, who was No way Near the Ball. Furthermore, he was Red Carded, but everyone from Real Madrid and Barcelona Dugout joined the Fight and Hand were used to push each other. Mesut Ozil was also part of the Argument after Marcelo’s Sent-off.

How will you feel? When your team is 2-0 down in the world’s biggest rivalry match between Real Madrid and Barcelona? Absolutely Frustrating, right. That’s what happened when the ball went out of play for a Throw, and the Barcelona Manager Pep Guardiola held it. What Ronaldo does is not a sporty thing and Pushes the Barcelona Manager harshly.

All the Barca players climb on him for his rude behaviour. Even the Barcelona goalkeeper Victor Valdes comes and joins the Fight. Instead of Ronaldo, Valdes was yellow carded. This was the biggest and worst el Clasico fights have happened so far. The incident took placed in November 2010 when Real Madrid was 2-0 down, and the match ended as 5-0 Real Madrid defeat.