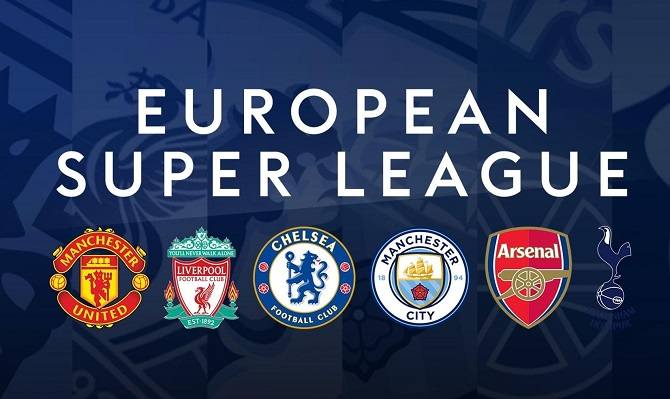 The European Super League is falling apart after outrage

Just two days after the ‘BIG’ announcement of the new European Super League shook the world of sport, the new tournament is already in disarray and has fallen apart just as fast as it came together.

A number of the ‘founding clubs’ of the new European league for super power clubs going back on their initial commitment, sending football fans into wild celebration.

Premier League ‘big six’ were part of a clubs that announced plans to form the European Super League, which they hoped to commence as a new midweek competition.

This move was widely condemned by supporters, football authorities globally and government officials in the United Kingdom and across Europe by league Associations and UEFA.

About 1,000 supporters gathered outside Stamford Bridge, Chelsea’s home ground on Tuesday night before their match against Brighton to protest at Chelsea’s involvement in the Breakaway League

It appears the main reason why the European Super League is falling apart is the manner at which football fans across the world stood against the proposed project and the threat from UEFA, FIFA, National FA’s and Government.

Aside from the threat by UEFA to sanction Super League clubs and prevent them from taking part in domestic and international football activities, FIFA has also threatened to prevent players involved in the breakaway league from participating in the FIFA World Cup

As if that threat is not enough, the Premier League threatened to sanction the six English clubs in the Super League and British Prime Minister Boris Johnson said he’s considering introducing legislation to stop them from forming a new competition in Europe he referred to as “cartel.”

Manchester United executive vice-chairman, Ed Woodward, who was heavily involved in the discussion to commence the Super League, has announced he will step down from his role at Old Trafford at the end of 2022.

Leading footballers at some of the six English clubs expressed their disapproval of the planned Super League.

Liverpool skipper Jordan Henderson posted on social media his team’s “collective position” is they do not want the European Super League to hold.

He wrote: “We don’t like it and we don’t want it to happen,” read a message that was also posted by many fellow Liverpool players.

While announcing their Super League proposals that would ultimately comprise of 20 clubs, the 12-club group said the UEFA Champions League reforms announced by European football ruling body on Monday, did not go far enough as expected.

President of Real Madrid Florentino Perez, who was named Chairman of ESL, said the competition was set up “to save football” because youths are “no longer interested” in the game of football because of “a lot of poor quality games”.

Premier League leaders Manchester City were the first team to pull out of the ESL after Chelsea had shown signs of intent to do so by getting ready the documentation to pull out.

The other four English ESL teams – Liverpool, Arsenal, Manchester United and Spurs – have all now followed the stance of City and Chelsea.

Italian team Inter Milan are also set to pull out as they no longer desire to be involved with the ESL project.

It is understood that Inter Milan hierarchies are preparing for their exit following yesterday night’s developments.

In an interview on Tuesday evening, Juventus chairman Andrea Agnelli disclosed that the remaining ESL clubs will go ahead with the project, with the project having a 100% chance of being a massive success.

Also, Premier League leaders Manchester City confirmed they have “formally enacted the procedures to withdraw” from the European Super League.

Merseyside giants Liverpool, whose manager Jurgen Klopp has expressed his displeasure, said their involvement in the proposed Super league “has been discontinued”.

Manchester United, who’s Executive Vice-Chairman Ed Woodward is leaving at the end of the year, said they had “listened carefully to the reaction from our fans, the United Kingdom government and other key football stakeholders” in making their decision to withdraw.

North London giants Arsenal apologized to their fans in an open letter and said they had “made a mistake”, adding they were pulling out after listening to the fans and the “wider football community”.

West London club Chelsea also confirmed they have “begun the formal procedures for pull out from the ESL group that they only joined late last week.

President of UEFA Aleksander Ceferin welcomed the reversal, stating that he admires the fact that those clubs admitted they made a mistake.

“I said yesterday that it is admirable to admit a mistake and these clubs made a big mistake.

“But they are back in the fold now and I know they have a lot to offer not just to our competitions but to the whole of the European game.

“The important thing now is that we move on, rebuild the unity that the game enjoyed before this and move forward together.”

British Prime Minister Boris Johnson said on twitter he welcomes last night’s announcement, as he sees it as the right result for football supporters, clubs, and communities across the nation.

ESL themselves seem to have conceded defeat in a statement released on Wednesday morning, insinuating that the league will no longer go ahead following the withdrawal of the six Premier League clubs.

“Given the current circumstances we shall reconsider the most appropriate steps to reshape the project, always having in mind our goals of offering fans the best experience possible while enhancing solidarity payments for the entire football community.”

Founder of the Breakaway European Super League and Juventus chairman, Andrea Agnelli says the proposed league can longer go ahead following the withdrawal of the English clubs.

The fall of the Proposed Super League reiterates the fact that fans own the beautiful game and they have the final say.