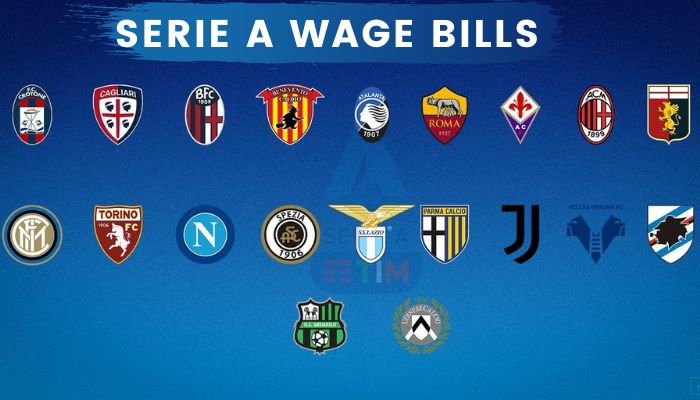 Serie A Wage Bills 2023-22: Salaries of All Italian Clubs Revealed

Serie A 2023/21 wages is reduced by €72m compared to the last year due to Covid-19. Juventus has witnessed the highest drop in the salary which is €58m while Milan has cut down €25m but still Juventus is the highest spender and Cristiano Ronaldo is the highest-paid footballer in the league. The latest reports revealed the financial details about the Serie A wage bills for the 2023-22 season.

According to some reports, the 2023-22 season to have an almost similar bill due to the ongoing pandemic as it has affected the clubs’ earnings. There is no increment in the Italian Serie A wage bill for the upcoming season and it is to remain around €1,288.

Juventus made the most cuts, slicing €58m off their total wage bill, even though they remain comfortably the biggest overall spenders on salaries.

Despite the reduction in the Serie A wage bills, some clubs signed many new players which have affected the club’s budget.

Juventus has the highest wage bill in the league with Cristiano Ronaldo pockets €31m of the club’s total salary bill €236m followed Matthijs de Ligt is the second highest paid player of Juventus with €8 million salary.

The second biggest spenders in Serie A, Inter Milan also did the cost-cutting in the current season, the wage bill reduced to €149m while the club’s highest earner Zlatan Ibrahimovic gets a salary of €7m per year followed by Gianluigi Donnarumma who pockets €6 million.

AS Roma is the third-highest club on the list who also decrease their wage bills by €13m. While Lazio on the other hand increased their wage bill by €11m to €112 million. The other club of the Seria A such as Atalanta gradually increasing their bills every year.

Disclaimer: The above information about the Serie A wage bills is based on the analysis, research and reports released by the officials.