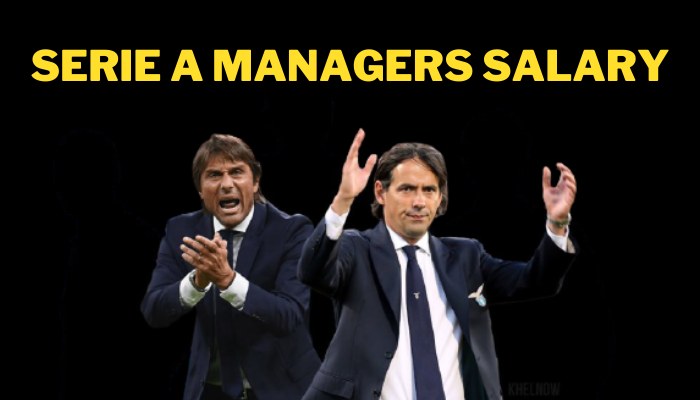 Serie A Managers Salary 2022: Who is the highest-paid manager?

By Siddharth Muruga Last updated May 8, 2021

Serie A also called Serie A TIM due to sponsorship is the premium professional football league competition of the Italian football league. Inter Milan won its first Scudetto in over ten years in the 2022-21 season, ending Juventus’s eight-year dominance in the league. Being one of the best leagues in Europe, the finances involved are the league are mind-boggling. Serie A managers salary are based on their contracts with the clubs.

Antonio Conte, manager of Inter Milan is the highest-paid manager in the Serie A football league with a salary of €12 Million which also makes him one of the highest-earning manager. The former Juventus manager has been instrumental in bringing Inter back to their best.

Paulo Fonseca who manages AS Roma is €2.5 Million, after successfully managing Shakhtar Donetsk in Ukraine. He led the side to fifth place in Serie A in his first season, as well as the semi-finals of the subsequent UEFA Europa League. AS Roma are in seventh place with four games to play and is set to leave this season and will be replaced by Jose Mourinho from next season.

Gian Piero Gasperini is the third-most paid manager in the league pocketing €2.2 Million per season. Managing Atlanta, he led the side to their first-ever UEFA Champions League run in the 2018-19 season.

Simone Inzaghi manages Lazio since 2016 after managing the youth squad of Lazio from 2010 right after he retired. The 45-year old earns €2 Million per season.

Stefano Pioli is the current manager of A C Milan. The former defender earns €2 Million a season.

Sinisa Mihajlovic is the manager of Bologna. The Serbian earns €2 Million a season as well and moved from Sporting in 2019 for the second time.

Andrea Pirlo is considered to be the best Italian midfielder to play in Serie A. His managerial career has had a rocky start but he still earns €1.8 Million in his first season as a manager for Juventus.

Claudio Ranieri joined as the manager of Sampdoria after a disastrous season with AS Roma in 2019. The former EPL-winning Lecister manager pockets €1.8 Million.

Roberto De Zerbi is the head coach of Sassuolo. Since taking reigns in 2018, he has constantly got his club finish in the top half of the league. He earns €1.1 million a season.

Disclaimer: All the facts and figures about Serie A managers salary are based on the analysis, research and reports released by trusted sources.