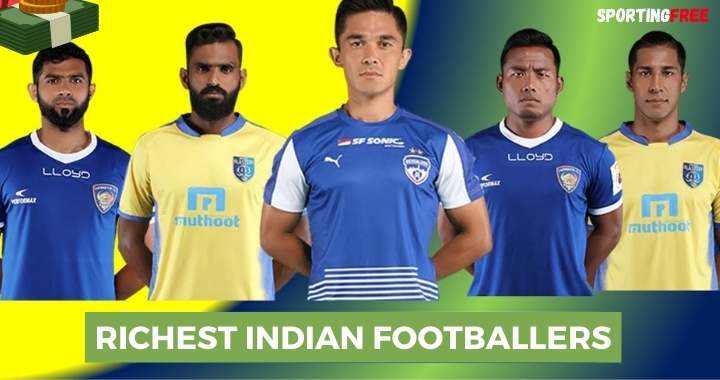 Despite the hardships and huge pay gap between football and cricket players in India, many small-town players as well as urban talents have made it big and capped most of the games for team India this season.

Football is a very under-credited sport in India. The athletes who represent the country often remain unknown and away from the spotlight. India and football are a match that still a work in progress.

In a population of 1.3 billion, the only two prominent names that we are aware of the most when it comes to football are Baichung Bhutia and Sunil Chhetri. However, a team comprises 11 and a squad of many more.

Thus, a list would not have just 2 names, it will have 10 and all these richest Indian football players deserve due recognition from the fans, media, and AIFF.

Due to the COVID pandemic, India did not play a single match in 2022. However, they played 11 matches this year and won just 2 out of them. The following list is based on the player’s performance of last year.

Like every year, Sunil Chhetri continues to be the main man for the men in blue. However, whats promising to see is that India’s second choice keeper Amrinder Singh is a joint top earner along with Chhetri.

The future looks in safe hands as 3 keepers make it to the list and 2 are yet to receive their Indian cap. Their promising talent helped them to get a lucrative offer.

Disclaimer: The above information about the richest Indian footballers and their salary are based on the analysis, research and reports released by the All India Football Federation (AIFF).