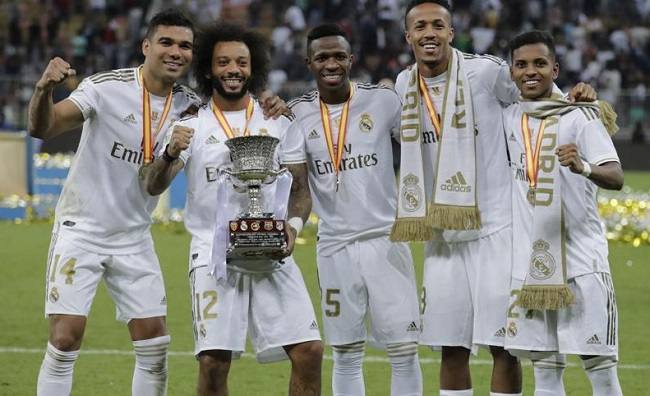 The popular Football clubs in the world are packed with Star players because of which the fan following and earnings go sky high. Whether it’s Cristiano Ronaldo of Juventus, Gareth Bale of Real Madrid or Messi and Luis Suarez from Barcelona FC. The people in masses go crazy about the Players and the team. Deloitte has recently revealed the huge revenues of Europe’s popular football clubs. In the list of top 10 richest football clubs in the world, there are five English Premier League clubs, two La Liga clubs, one German club, one French club and one Italian club.

Real Madrid is leading the most valuable football club race since 2018, leaving behind Manchester United. The Football Clubs earn through various factors like broadcasting rights, sponsors, the kit partners and much more such financial behind the scenes operations. So, today we are going to take a look at the world’s richest football clubs.

Juventus is an Italian Football Club that participates in the Serie A-League, the top tier Football league of Italy. Moreover, this is the time where the real elite start, with a jump up to nearly €428.3 million in revenue. Juventus is the highest-earning Serie A club. The revenues of the club witness some decline but signed Cristiano Ronaldo the last summer.

The Gunners didn’t have much of the Success story under the French men Arsene Wenger, but Arsenal failed to perform in the Premier League under his regime consistently. The Gunners annual income showed an exclusive revenue of  €439.2 million. Arsenal moves downward of their premier league rivals Chelsea and Liverpool.

Another English Premier League Club is also one of the consistent performing clubs in the EPL. The Royal Blues has star players like the Belgian international Eden Hazard and the Spanish Striker Diego Costa as the leading goalscorer. Chelsea drops one place in the rich list after their revenue dropped by nearly £5m despite winning the Premier League in 2014/15 and a bumper television deal. Chelsea is at no.8 in the world’s highest-earning football clubs list.

Liverpool is a Premier League Club and the highest-earning non-Champions League club in the lowest of five Premier League teams in the top nine with a reputation. Hugely popular all over the world, Liverpool has had an absolutely massive fanbase for the last few decades. Liverpool’s average earning for the 2019-20 year was €513.7 million.

The Citizens missed out on the top five for the second year running after a £4.3m increase in income. The New Manchester-based club has reached heights in Success after being taken over by the UAE Billionaire Sheikh Mansour. Manchester City has star players such as Yaya Toure, David Silva, De Bruyne, Raheem Sterling etc. For the Annual year 2022-21, Manchester City’s annual income was around €568.4 million.

Bayern Munich is the leading Geman Club who plays in the Bundesliga league and has dominated the league for the past few decades. Despite winning a record 25th German championship, Bayern’s revenue dropped by £40m for the 2014/15 season, meaning they fall to fifth in the Football Money League, their lowest position since 2006/07. For the Annual year 2015/17, Bayern Munich’s annual income was around €629.2 million, making them one of the highest-earning football clubs in the world.

English Premier League Giants Manchester United drop from second to third this year. Still, Tim Bridge, Senior Manager at Deloitte, was impressed nonetheless: “Despite a reduction in revenue year-on-year, the fact that Manchester United remain in the top three of the Money League demonstrates the underlying strength of the club’s business model. The return to Champions League football and the commencement of several significant commercial partnerships will only strengthen the business in 2015/16. For the Annual year, 2022-21, Manchester United’s annual income was around €666 million.

The Dominant Club from the Spanish La Liga FC Barcelona is one of only two teams worldwide with yearly revenue of over £400m; Barcelona’s on-field success transferred to their finances, with the Catalan club enjoying a £21.2m increase in income and rise from third place to second. For the Annual year, 2019-20, Manchester United’s annual income was around €690.4 million. FC Barcelona is the highest-earning football club below Real Madrid.

Real Madrid top the Deloitte Football Money League, and they are the world’s highest-earning football club, having generated €750.9 million in the 2019-20 season. Commercial revenue was the main driver of this growth, while matchday income also saw a significant increase. However, the major reason is Real Madrid’s growing popularity across the globe, with the likes of Cristiano Ronaldo and Gareth Bale on the side.