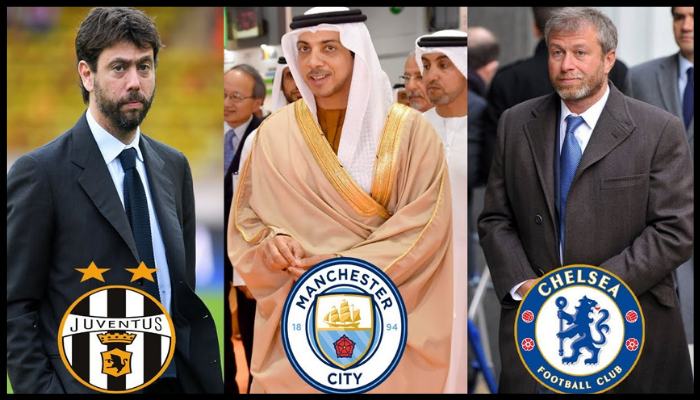 Just like every other sport in the world, football too is interdependent on money. Financing and funding form the backbone of football clubs. It is a well-known fact that majority of successful clubs have a wealthy ownership and hefty financial support which enables them to bring in star players and managers. Here is a list of the 10 richest football club owners in the world.

Aiyawatt Srivaddhanaprabha is a Thai businessman who is the CEO of King Power Group. He is the owner of English side Leicester FC and Belgian side OH Leuven. He took over the ownership from his father, Vichai who tragically died in 2018. Aiyawatt has a worth of $6Billion.

In the tenth place, we have Robert Kraft. He is the owner of the American MLS club New England Revolution. He is a billionaire who previously owned San Jose Earthquakes; another MLS club. Besides soccer, he also owns the NFL team New England Patriots. His estimated worth is around $7Billion.

Al Khelalifi is the reason behind Paris Saint Germain’s rise in the French Ligue1 and subsequently in Europe. The Qatari businessman took over PSG in 2011 and has roped in many world-class players including Neymar, Zlatan Ibrahimović.

He is one of the richest football club owners in the world with a net worth of $8 Billion. After his takeover, the club has won 7 titles in ten years.

Stan Kroenke is an American Businessman who owns a company called Kroenke Sorts and Entertainment. He has a net worth of $9Billion. The diversified sports portfolio of his company includes two football teams; Arsenal and MLS side Colorado Rapids.

Phillip Anschutz is an American Billionaire. He is one of the founding members of Major League Soccer and currently owns LA Galax. He was previous owner of many MLS clubs like Chicago Fire, Houston Dynamos and the San Jose Earthquakes. Anschutz has a net worth of $10 Billion.

Roman is one of the famous club owners in football and is often a topic of discussion. The Russian businessman owns Chelsea FC since 2003 and has a net worth of $12.5 Billion. Since his takeover, Chelsea has won five Premier League titles.

Dietmar Hopp is a German businessman who has a worth of $18.5 billion. He owns the Bundesliga club Hoffenheim.

Andrea Agnelli is an Italian business tycoon who belongs to the industrialist Agnelli family. He is the owner of Juventus and is worth $19.1 Billion. Agnelli has recently caught himself in hot waters because of his leading position in the formation of the European Super League.

Dietrich Mateschitz is an Austrian business giant who owns the company, Red Bull. Under the name of Red Bull, he owns several football clubs which include RB Leipzig in the German Bundesliga, RB Salzburg in Austria and MLS club New York Red Bulls. With a net worth of $26.9 Billion, he is surely one of the richest football club owners in the world.

Sheikh Mansour is the richest football club owner in the world. The Emirati businessman is an influential global figure. He is best known for his takeover of Ownership at Manchester City. It is not a hidden fact that Manchester City is at the pinnacle in Europe only after Sheikh’s funding and ownership.

But Manchester City is not the only club that he owns. He also owns many other clubs across the world which makes his net worth $30 billion. He owns clubs – MLS’s New York City, Australian side Melbourne City, Mumbai City FC in India, Belgian side Lommel SK and the Uruguayan team Montevideo City Torque.