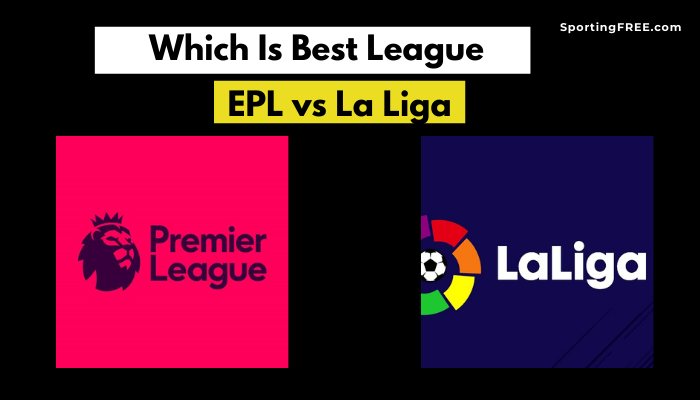 Premier League vs La Liga: Which Is The World’s Best Football League

The debate on which soccer league is the best, English Premier League vs La Liga has been going on for ages and has kept the footballing world divided through the opinions for years. It is a well-known fact that both Premier League and La Liga draw fans from all parts of the world and have a massive following. Let’s analyze both the leagues simultaneously to gain a deeper perspective into this debate.

The English Premier League is the Most Popular Soccer League

Premier league overtakes La Liga when it comes to fan following and the reach of the league; it is the most-viewed football league in the world and players of more than 110 different nationalities have played in the Premier League.

The reach of La Liga is less when compared to the PL. When it comes to the gameplay, Premier League is considered to be physical when compared to its Spanish counterpart. La Liga is the more technical league and focuses on High-quality dribbling, passing, pressing.

Teams like Atletico Madrid are famous because of their defensive display and pressing; Real Madrid is famous for its counter-attacking play and Barcelona focuses on one -to -one passing, dribbling, retaining possession and accuracy.

In the Premier League, there is a strong emphasis on speed and athleticism which results in faster gameplay. attacking and quick-pressing technique is valued in the Premier League and the players are encouraged to get the ball forward quickly, to catch their opponents off guard.

The teams like Manchester City and Liverpool are the fastest when it comes to move the ball forward and utilize the swift pace of their wing-backs and forwards.

In terms of competitiveness, La Liga is often considered as a two-horse race with Barcelona and Real Madrid dominating the leagues over the years. In the last decade, 9 out of ten times the winner is either Barcelona or Real.

The premier league always has a “title race” as compared to la Liga where the winner is almost predictable. Even though the likes of Man City and Liverpool have started to dominate the league slowly, the battle for the title is very tough and very often goes down to the wire till the last game day which makes it more exciting to watch.

EPL has more successful and elite clubs like Manchester United, Chelsea whereas La Liga has witnessed the presence of the two best footballers – Lionel Messi and Cristiano Ronaldo.

La Liga teams have also been dominant when it comes to performing at the big European stages like Champions League and Europa League.

The 8 out of ten times the Spanish teams have either won the competition in the decade or have finished as runner ups. Real Madrid is the most successful team in the Champions League with 14 titles to its name and has won three consecutive titles.

In the Europa league a well, Spanish teams have dominated with Sevilla winning the competition thrice in a row and Spanish teams winning 6 out of 10 times in the decade.

Ultimately both the leagues are different and each league possesses some unique elements that the other league doesn’t and hence labelling one better than the other comes down to one’s preference and following. Comment down below which league you think is better?