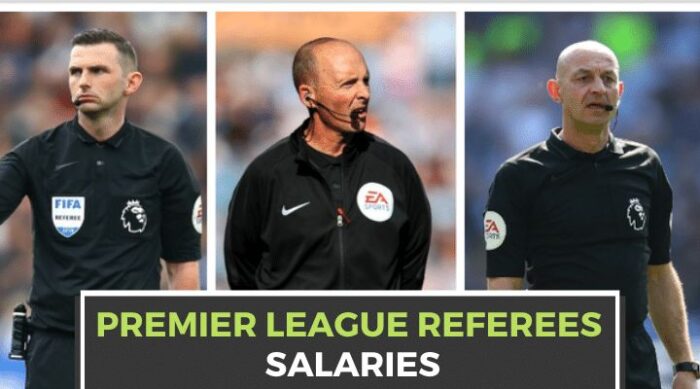 Premier League is the most viewed and famous league in the world. With some of the top clubs competing against each other, it becomes a treat for the eyes to watch them play. Despite the players grabbing all the eyeballs, its the referees who complete the league and play a huge role in the game.

However, referees often make the headline only when are to be criticized for a wrong decision or alleged favouring a team. But they do go unappreciated for their work on the pitch.

But do you know what does it takes to become a referee? Who are the referees of the current premier league season? what are the Premier League referees salaries and who is the highest earner?

The official Champions League referees or any other international matches referees earn around £200,000 anually.

Premier League has a referee body named Professional Game Match Officials Limited (PGMOL). PGMOL was formed in 2001 and is responsible to appoint a referee to the premier league. They also look forward to improving refereeing standards for the league.

Being a referee means to have a keen eye on the game from start to finish and its not easy. After the introduction of new rules in the Premier league annual meeting held in August, the job of a referee just got tougher.

However more the responsibility more the pay, so here is the list of referee’s salary for the 2022-21 Premier League season.

Mike Dean, Michael Oliver and Martin Atkinson reportedly earn around £200,000 a year while Anthony Taylor and Kevin Friend are earning £70,000 per year.

Mike Dean is the most experienced referee in the premier league with 511 matches to his name and is paid the highest earner along with Martin Atkinson, Michael Oliver.

Disclaimer: The above information about the Premier League referees salaries are based on the analysis, research and reports released by the All India Football Federation (AIFF).