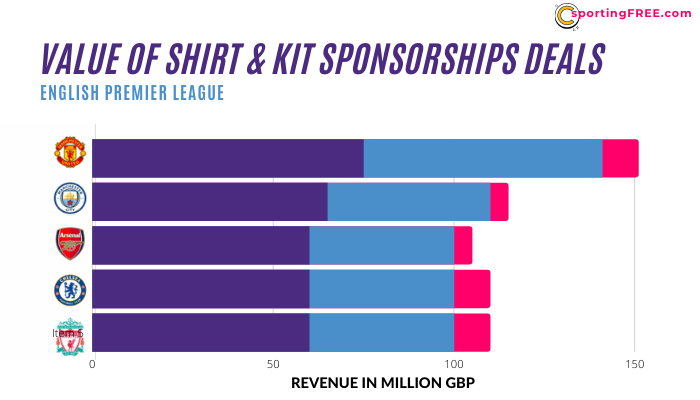 Every club in the Premier League partner with some of the biggest sports brands for their kit deals and shirt sponsorships. As per the reports, the combined revenue of all the 20 English Premier League from the shirt deals was around £800 million last season.

The total revue earns by the clubs the last edition from Kit suppliers deals was £389.5 million. The value of kit sponsorships deals in the Barclays Premier League has been increased significantly due to the commercialization and wide of reach of global audiences.

Let see all 20 Premier League Kit deals and shirt sponsorships and how much they are impacted by this pandemic.

All the 20 Premier League clubs are sponsored by eight different brands this season such as Adidas, Umbro, Nike, Puma, Erreà, New Balance, Kappa and Under Armour.

Adidas supply kit for the six football teams in the league including Manchester United and Leicester City with 30 per cent share while Umbro pockets 20 per cent share with four teams under its belt.

The Nike and Puma also supply kit in the Premier League with 15 per cent share each followed by Erreà, New Balance, Kappa and Under Armour with 5 per cent share.

Which club has the most expensive kit deal in Premier League?

A lucrative ten-year deal with Adidas from the 2015-25 season, Manchester United’s earn £75 million a year which makes it the most expensive kit deal in Premier League.