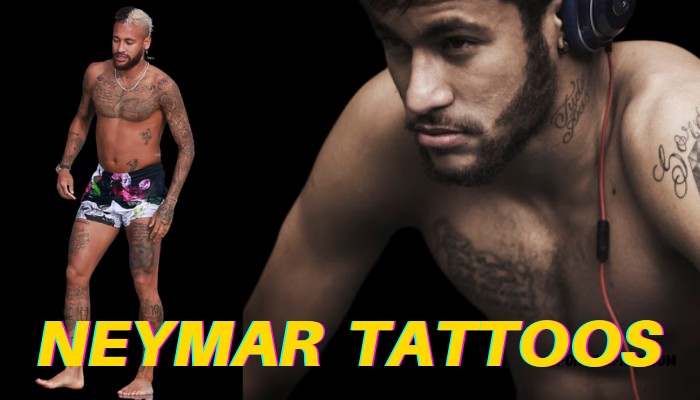 Neymar’s Tattoos: The Real Meanings and Stories Behind Them

Neymar is one of the most stylish footballers. He is well known for his funky hairstyles and fashion sense. Like many other popular footballers, the Brazilian forward also has many different tattoos on his body. Here we’ll see every Neymar’s Tattoo and the meanings and stories behind them.

Neymar junior has more than 30 tattoos on his body and almost all of his tattoos are made by tattoo artist Adao Rosa.

Neymar’s Tattoos and The Real Meanings Behind Them

Neymar’s right bicep has the face of his mother Nadine Santos tattooed on it. He has made this tattoo a sign of love towards his mother.

Neymar has a prayer tattooed on his right chest. The prayer is a tribute and love towards his father.

The word Love is inked on the side of his left palm.

Neymar’s left hand has a tattoo of Lion’s face. His left ring finger has a crown tattoo and a tick mark tattoo on adjacent finger.

READ: Lionel Messi’s Tattoos and the Real Meanings Behind Them

Neymar has the tattoo of his sister Rafaella Santos on his right shoulder. Neymar has a very close relationship with his sister and it is also known that he even skips matches to attend her birthdays.

The word Blessed is inked on Neymar’s upper back just beneath his neck.

Just above Neymar’s right thigh, the words Never Ending love are inked. Neymar said that he cannot reveal the meaning behind this tattoo. He got this tattoo when he was dating Bruna marquezine.

Neymar has a tattoo of the roman numerical IV on his right neck. The number signifies the members of his family i.e. his two parents, his sister and himself.

Neymar has a tattoo of three little birds along with the words Tudo Passa  on his left neck. The words, Tudo Passa mean that nothing last forever, just like how birds never stay at one place.

Neymar’s left shoulder has a diamond and the word sorella on it. The word sorella means sister and Neymar has dedicated this tattoo to his sister Rafella, another example of his closeness to his sister. This kind of tattoo is hard to get without a wireless tattoo machine and more about this you can check here.

Neymar’s right forearm has a tattoo of the name of his son, Davi Lucca along with his date of birth, 24*08*11.

Neymar has a cross inked just above his ‘Blessed” tattoo. This tattoo signifies his religious faith.

Neymar’s left ankle has the word Ousadia and his right ankle has the word, Alegria inked on it. Ousadia means courage and Alegria means Joy which explains his playing style, his growth and development during  his career at FC Barcelona.

Neymar’s outer left forearm has a tattoo of tiger on it.

Neymar’s right neck has a tattoo of a feather and the words Dream Chaser written in cursive.

Neymar’s left index finger is inked with the words Shh…

Neymar’s outer left upper arm has a cross and a crown inked on it.

Neymar has a tattoo of a small cross and a ring on his right hand.

Front side of Neymar’s left forearm has a tattoo of  two hands praying with a sun behind them. This tattoo also signifies his faith and belief in religion.

Neymar’s left bicep has the word Family tattooed on it. Another gesture of love towards his family,

A tattoo of a closed fist with the words, “Far parte de mi historia” is inked on the upper left arm of Neymar. This tattoo is the same as his three friends.

Neymar’s outer right wrist has the name of his sister Rafaella tattooed on it. This is the Brazilian’s first ever tattoo.

Life is a joke tattoo

Neymar’s upper left arm has the phrase Life is a joke inked on it. This signifies Neymar’s take on his life.

READ: Every Conor McGregor Tattoo and The Real Stories Behind Them

Neymar has the name of his mother, Nadine alongside an infinity symbol inked on his outer left wrist. This tattoo represents Neymar’s undying love for his mother.

The words, ‘Dios es Fiel’ are inked on the inner side of Neymar’s left wrist. The words meaning is God is faithful. Neymar got this tattoo after winning the Champions league with Barcelona.

Neymar has the words Stay Strong inked on his left shoulder just above his diamond tattoo.

Neymar has a tattoo of a football wearing a crown along with a sketchy outline of himself at back on his calf. This tattoo shows Neymar’s love for football and how football has given him everything in return.

Neymar has a tattoo of a boy holding a football, standing on the ground looking at the favelas in Brazil dreaming of football and a home on the back of his left calf. He got this tattoo to show that he has not forgotten where he came from. The place in the background is his home. He said that the tattoo inspires him to seek new heights.

Neymar has the portrait of his son Luca Davi’s face tattoed on his inner right forearm.

The upper part of Neymar’s left arm has a tattoo of a flower.

Neymar has tattoos of his favourite superheroes Spiderman and Batman on his back.

Neymar has tattooed his son Davi Luca’s eye on his right arm just above his elbow.

Neymar’s left side of his body has a tattoo of a small Mickey Mouse holding a football. Mickey mouse is Neymar’s favourite cartoon character.

The left chest is inked with the tattoo of an Eagle. There is a poem and a football field surrounded by trees inked just below the eagle tattoo.