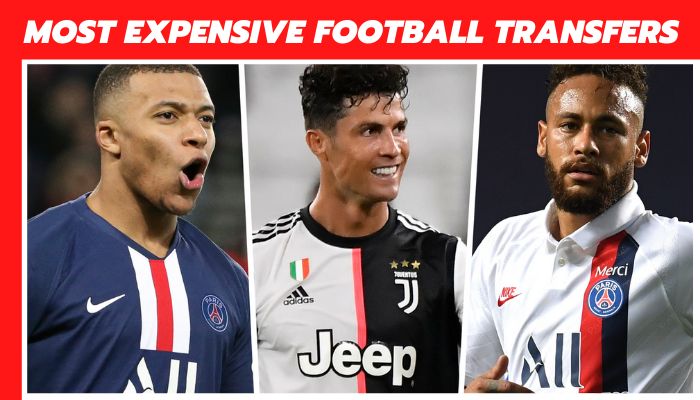 Top 50 Most Expensive Football Transfers of All Time 2023

The modern football clubs spend huge amounts of money to sign players and recently we have seen some of the biggest football transfers involving a huge amount of money. The transfer of Brazilian footballer Neymar from Barcelona to PSG shocked the whole world as Paris Saint-Germain paid 222 million euro which was twice the previous record. Here’s the list of top 50 most expensive football transfers of all time.

Most Expensive Football Transfers of All Time

Most Expensive Footballer in the World

Neymar made the highlights when he joined Paris Saint Germain for €222 million ($262 million). Only a handful of clubs can afford such a huge transfer fee. In 2017, PSG approached him and he couldn’t deny their offer.

The Most Expensive British Player

The Welsh international broke all records and became the most expensive signing in 2013. He joined Real Madrid for the record transfer fee of €100 million (then $132 million) which also made Bale, the most expensive British player of all time. To date, he remains the costliest signing by Spanish clubs.

Most Expensive Transfer by English Club

Liverpool did one hell of a business by selling Coutinho to Barcelona for  €120 million ($145.2 million). He joined Liverpool from Inter Milan for €13 million ($17.3 million). It is one of the best businesses done by English clubs.

Most Expensive Transfer by German Club

Dembele is the most expensive sale by German clubs. After spending a season with Dortmund in Germany, the France international services were bagged by Barcelona for €105 million ($123.9 million) with up to €42 million in bonus payments.

Most Expensive Transfer by Spanish Club

One of the world’s best players Cristiano Ronaldo after winning our Ballon d’Or, four Champions League and two La Liga titles with Real Madrid joined Juventus for €117 million ($136.9 million). It is the fourth most expensive transfer in the world.

The Frenchman is one of the promising young talents. At such a young age he is a FIFA World Cup winner. In the 2017-18 season, Mbappe joined PSG from Monaco on loan (€45 million). The deal was made permanent in the very next season. Paris Saint Germain paid a €135 million transfer fee.

Harry Maguire is the most expensive defender of all time, he moved from Manchester United for a whopping price of €87.1 million to Leicester City in 2019.

The Dutch international, Virgil van Dijk is the second most expensive defender who joined Liverpool in the January transfer window of the 2017-18 season. Liverpool was in desperate need of a defender and they signed the former Celtic man for a reported 75 million pounds (€84.2 million, $101.3 million). Since joining Liverpool Van Dijk is one of the best footballers in the world.

Italy’s giant Juventus were eager to sign Higuain after he had an impressive season of 36 goals in 35 appearances for Napoli in 2015-16. Juventus finally signed its target for €90 million ($99 million) and broke the record of the most expensive South American player transfer at the time. He spent two seasons with them before moving to AC Milan in 2019.