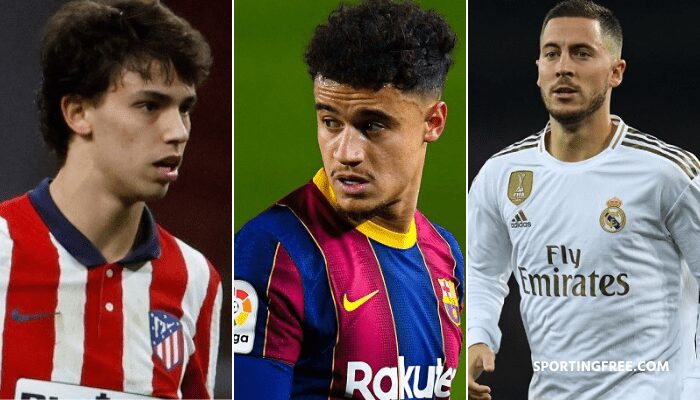 The summer transfer window is open and the league could witness the most expensive La Liga transfers this season.

La Liga 2022/22 season is set to kickstart from August, and clubs have commenced preparation for the upcoming season. While clubs like Real Madrid, Valencia and Granada have made personnel changes by bringing in new managers, FC Barcelona is on a signing spree as the Catalan club has signed many players, including Sergio Aguero, Memphis Depay, Eric Garcia.

As the brand new season nears its commencement, clubs have started signing players. On that note, let’s have a look at the top 10 most expensive transfers in La Liga History.

Real Madrid legend Zidane joined the club from Juventus in 2001. Zizou was signed by Los Blancos for a fee of £69.75m. The Frenchman went on to attain legendary status at the club and retired with great accolades in 2006.

Zidane went on to become the manager of Real Madrid and guided the club towards 2 La Liga titles and 3 Champions Leagues as a manager.

Luis Suarez joined FC Barcelona from English club Liverpool in 2014. The Uruguayan striker was signed for a fee of £73.55m and has been a prolific striker in La Liga ever since joining.

Suarez went on to make more than 300 appearances for Barcelona and scored more than 200 goals. He left the Catalans after six years and joined rivals Atletico Madrid in 2022.

Brazil superstar Neymar joined FC Barcelona from FC Santos in 2013. The Catalans signed him for a fee of £79.38. Neymar rose to fame at FC Barcelona where he scored 105 goals in 186 appearances for them. After four years at Barcelona, Neymar left the club to join French side Paris Saint Germain.

Cristiano Ronaldo joined Real Madrid from Manchester United in 2009. Ronaldo was signed by Los Blancos for a record fee of £84.6 Million, making him the costliest player at that time. CR7 became a Real Madrid legend and won many trophies with the club, including 4 Ballon d’Or.

He is Real Madrid’s all-time highest goal scorer with 450 goals in 438 matches. Ronaldo left Madrid to join Juventus in 2018.

Eden Hazard joined Real Madrid from Chelsea in 2019 for a transfer fee of £90 Million. The Belgian has failed to impress so far as injuries have impacted his career, and he has managed to make just 50 appearances in two seasons.

Gareth Bale joined Real Madrid from English club Tottenham Hotspur in 2013. Bale was signed for a transfer fee of £91 Million, making him the most expensive player at that time. Bale went on to make 270 appearances for Real Madrid and score 113 goals.

Antoine Griezmann joined FC Barcelona from Atletico Madrid in 2019 for a fee of £108 million. Griezmann is slowly settling at the Catalan club and has scored 38 goals in 107 matches for Barcelona.

Dembele joined FC Barcelona from German club Borussia Dortmund in 2017. The young forward was signed for a whopping transfer fee of £112 Million. Dembele has suffered many injuries during his time with the Catalan club and has fallen down the pecking order at the club.

Atletico Madrid signed Joao Felix in 2019. The teenage superstar was signed for a record transfer fee of £113 million. Felix has made 80 appearances and scored 22 goals for Atletico Madrid till now.

Coutinho is the most expensive transfer in La Liga history. The Brazilian midfielder joined FC Barcelona from Liverpool in 2018 for a record-breaking fee of £130 Million.

Needless to say, Coutinho was a misfit for the Catalan club as he was loaned out to Bayern Munich just after one season. He has been an outcast and has failed to get game time at the club.