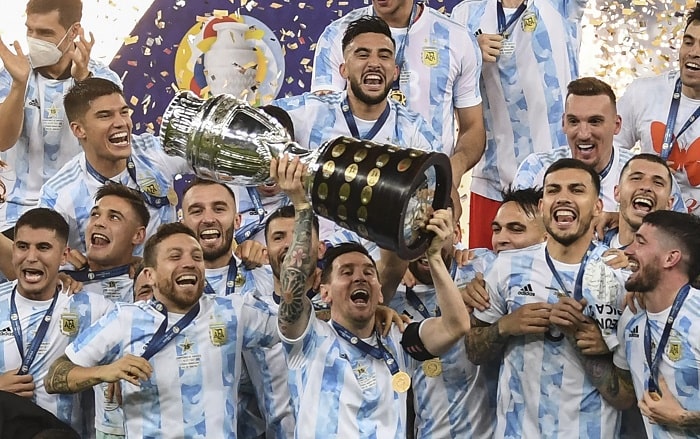 The technical committee of Copa America 2022 decided to play along with the finalists: Argentines and Brazilians. Therefore, before the final, they separated the Best Player award between two players. The prize was received by Neymar and Messi because, as the CONMEBOL committee states, there are two best players in this competition. The media assumes they were afraid to upset Lionel in case of defeat in the final. It is important for the federation that the striker does not leave the national team.

On the pitch, the captain of the Argentine national team was impeccable this time. On the way to the cup, Lionel was great. In seven games, Messi has 4 goals, 5 assists. He also scored in the penalty shootout with Colombia.

Messi showed emotions when necessary: he pressed Mina, supported the attacks, passed the ball more often than he tried to score himself. This time, his teammates supported him: Lautaro Martinez and Alejandro Gomez also scored goals. Scaloni put together a united team, although before him for 28 years, often more experienced mentors tried to do this.

It is difficult, especially if you go online on the second day after another misfire against the Germans or Chileans, and tens of thousands of angry comments have been written to you personally. Lionel was more than once accused of wrong actions in Argentina’s shirt, but this time there was a unified atmosphere of a pandemic tournament, the pressure from the stands eased.

Messi remembers every misfire. He shares the pain of losing the final to Germany. Not 7:1, like the Brazilians, but in overtime after Goetze’s goal. Both outcomes were not the most predictable, especially if you studied statistics and odds beforehand. If you guess such a result, we recommend bonuses from https://bookmaker-ratings.com/bonuses/ to maximize the gains.

Emiliano Martinez has saved on penalties with Colombia at this tournament, Udinese’s de Paul has fully earned the talked-about Atlético deal, and Scaloni will go to Qatar with Argentina as he is the correct coach for Messi.

The captain has 129 points in overall scoring stats

In comparison, Maradona became the greatest Argentine national team player in history, although he has 39 points in terms of goals and assists. Ninety less than Messi. Even if you recalculate the average per match, you will get a score of 0.85 against 0.43, that is, Lionel’s an almost two-times advantage, although the bulk of the rivals are the neighbours from the continent. So do not underestimate Messi’s contribution to the national team.

Just the flights from Barcelona to South America themselves took away a lot of strength and health from him (frequent long flights are associated with rather serious radiation exposure, doctors strongly advise against doing transatlantic flights with work). Messi complained about his condition before the accident but was not heard.

Argentina has been waiting for this for 28 very long years

A unique case: so many years without victories. In the lineups of different years, there were megastars like Riquelme, Aymar, Zanetti, Mascherano, Tevez and Cambiasso, but the trophy did not go into their hands.

This story would not be so beautiful if it were not for Higuain’s misses in the finals and misfires even before Lionel appeared on the national team. If Messi was not nervous in his youth years, we know how teammates from the national team and a former coach said that he had indigestion and nausea before important matches. The players gave all their best, but no luck. After all, he took Argentina to the finals. Six years ago, he was already the best player in Copa America. But we needed a fourth final in the tournament and a fifth with the national team to see Lionel getting the trophy after all.