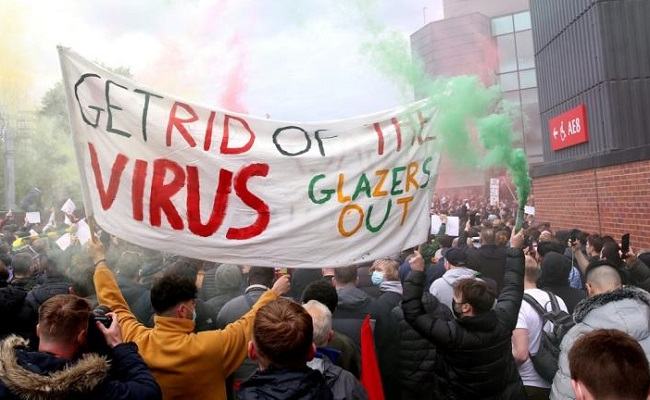 Manchester United will work with police to identify protesters who committed criminal acts which led to the Premier League match Man United vs Liverpool being postponed.

In the official statement, Manchester United said that the club will punish fans who committed criminal activity in the protests at Old Trafford on Sunday.

Ever since the formation of the European Super League was announced, it started facing harsh criticism and backlash. The fans, ex-players and current players of teams expressed their disappointment in various ways. The impact of their dissent was successful as clubs like Liverpool, Man City, United and Chelsea announced their pullback from the Super League.

Just like every other fan, Manchester United fans too were angry with this decision. Their anger and dissent were against club owners; The Glazer family and Ed Woodward; United’s executive vice-chairman. Woodward announced that he will be stepping down from his role and leaving the club at the end of this season.

Manchester United fans have had enough from the American owners of the club and are demanding that they leave their own owing to their disinterest in the club and lack of accountability. To amplify their disappointment, the fans gathered around the Old Trafford Stadium to protest, just before Manchester United were set for a Premier League faceoff against Liverpool.

The peaceful protests turned violent within no time and the fans stormed into the empty stadium in a wild display of emotions. A flare was thrown at the broadcaster’s podium and some protesters clashed with police outside the ground. 6 Police officers were injured during the demonstrations with one fracturing his eyeball.

This display became a grave security concern for both the teams and they were advised to not leave the hotel. The fixture ended up being postponed eventually and The Greater Manchester Police said that the incident was now into their hands and they will investigate and carry on arrests if necessary.

Manchester United released a statement condemning the criminal acts that took place. The club further stated that it will not punish those involved in the peaceful protests and acknowledged the fan’s right to peaceful protest, but will work with the police to identify those involved in the  criminal activity, and will also issue its own sanctions to any season ticket holder or member identified, per the published sanctions policy