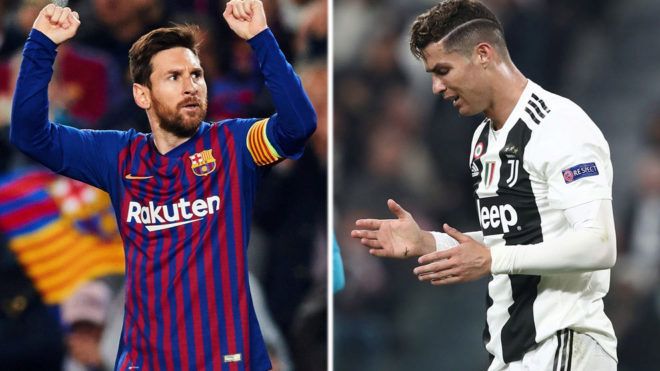 Who is a better footballer of all time Messi or Ronaldo? Here’s the statistical comparison between Cristiano Ronaldo and Lionel Messi.

Lionel Messi vs Cristiano Ronaldo Records, Career Stats, All-time Goals, Red Cards, Hattricks and Awards Comparision. One of the most asked question in the football world is who the better football player between Messi vs Ronaldo. No doubt they both are best footballers on the planet right now and it is our the privilege that we watching them playing in the same era. Both have won combined eight FIFA Ballon d’Or awards and has many individual achievements under their belts. But sports fans and journalists always debate on a question – who is the best player in football?

Both Messi and Ronaldo have scored more than 500 goals in their careers for club and country. Ronaldo himself once asked this question and in reply, he had said, “You cannot compare a Ferrari with a Porsche because both have a different engine.” But we tried to find who is a better player by comparing them to each other on the basis of their careers stats and records. Let’s find the answer to this million-dollar question.

Cristiano Ronaldo is more athletic which makes him more professional compared to Messi and has the ability to score all type of goals. On the other hand, Messi is better at building up attacks and can find that killer pass which can split even hard rock defences of the opposition team. There is no doubt that both are the greatest players in the football world but the question is who is better Messi or Ronaldo? So, let see their clubs and international statistics.

Messi has won four Champions League titles as Barcelona player while his rival Ronaldo has won the Champions League thrice, one with Manchester United and twice with Real Madrid. He has won a premier league total four times – thrice with Manchester United and once with Real Madrid while Messi has won eight La Liga titles with Barcelona.

Messi has amazing club record but failed to repeat this in international tournaments. Meanwhile, Ronaldo has played well in the international competitions and finished once as runner-up (Euro 2004) and recently won Euro 2016 with Portugal.

Ronaldo is the only player to win the European Golden Shoe award playing for two different clubs and the only one to win it four times. He would have won many awards if they were introduced earlier. Don’t forget, he is the fastest Real Madrid player to reach 50, 100, 150, 200 as well as 250 club goals in the club’s history.

Ronaldo has got a red card 11 times in his career which includes once for Juventus, six for Real Madrid and four cards for Manchester United while mess got only two red cards in his entire career.

So now we have quite a clear image, Messi has achieved everything a football can dream of and he is two years younger than Cristiano Ronaldo. He has won Champions League titles, FIFA player of the year awards and he is behind Ronaldo with few goals with more assists. He has broken almost all big scoring records.

CONCLUSION: According to the above stats between Lionel Messi vs Cristiano Ronaldo, records and honours, Lionel Messi is a slightly better player than Ronaldo not just in terms of record but also as a team player.