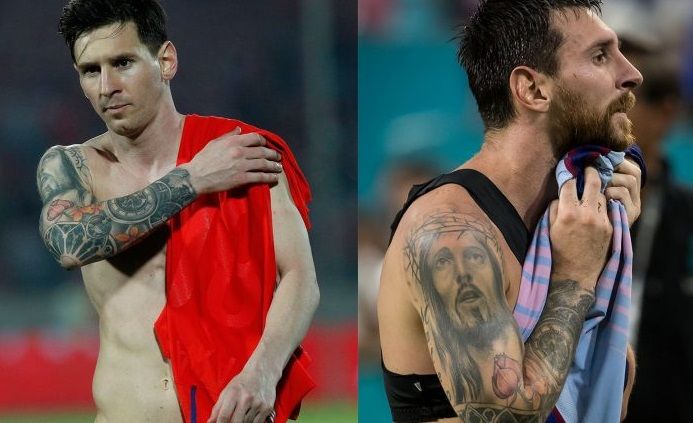 Lionel Messi’s Tattoos and the Real Meanings Behind Them

Lionel Messi’s tattoos are very popular among football fans. The back, elbow, arm, or leg of La Pulga are covered with more than 15 tattoos and some of the tattoos have stories and deep meaning behind them while some are inked just for fun.

Tattoos have become the trendsetters and fashion style in modern football with many players getting under the needle to get inked. Messi is not the only footballer, there many great players like David Beckham and Zlatan Ibrahimovic who have several tattoos on their bodies.

What Do Lionel Messi’s Tattoos Mean?

The 6 time Ballon d’Or winner, Messi has 18 tattoos on his entire body and all his tattoos have some significant meaning behind them.

His mother’s face tattoo on back

Leo Messi’s first-ever tattoo is the face of his mother inked on the left side of his back. He regards his mother as his inspiration and as a token of love and respect for her, got his mother’s face tattooed in 2010.

Messi became a father for the first time his son Thiago was born in 2012. To celebrate Thiago’s birth, Messi got a tattoo of his son’s handprints on his left calf.

There was confusion regarding his handprints tattoo as many people interpreted it as Diego Maradona’s Hand of God tattoo. Thus, to clear off the confusion, Messi inked his son’s name beneath the handprint tattoo.

Messi has a number 10 tattoo engraved on his shin. The number is his jersey number for his club Barcelona and national team Argentina.

A small football tattoo is present on Messi’s left leg.

Messi’s bottom-left leg is covered in black ink. The ink is plain and the purpose is to hide his previous dagger tattoo which he had on the leg.

Messi tattooed his right foot’s shin with the names and birth dates of his wife Antonella and all his three sons; Thiago, Matteo, and Ciro in 2018.

A tattoo of Rose’s window is found on his elbow. The window belongs to Sagrada Familia basilica church in Barcelona and shows Messi’s love for the city of Barcelona.

Messi has a  small crown tattoo on his arm. This is his only couple’s tattoo as his wife Antonella has the same tattoo on her.

Messi has a giant clock inked on his right arm. The clock signifies the value and importance of time.

Inside of Messi’s bicep has a tattoo of his wife Antonella’s eye. This is to pay further tribute to the love of Messi’s life.

Messi has a tattoo of his wife Antonella’s lips on his upper groin region.

Messi has the name of his second kid, Mateo inked on his right hand.