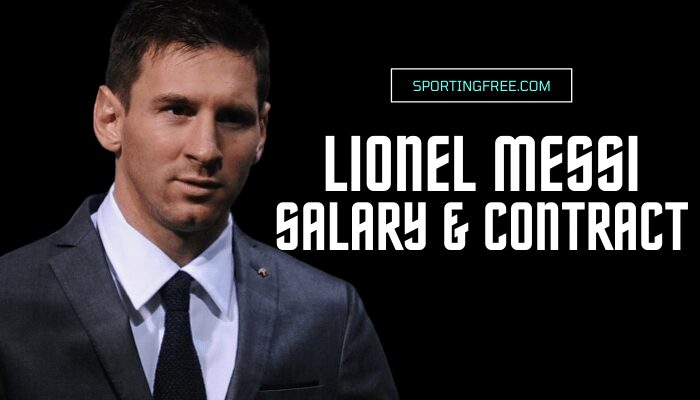 Here’s everything you need to know about Lionel Messi’s annual salary at Barcelona FC, which was the most exorbitant deal in sports history.

Lionel Messi is frequently referred to as one of the best football players in the world, if not the best in history. But how much does the talisman of Barcelona make in a year? Let us see Lionel Messi salary and contract in detail.

How much does Messi make a Week?

The Barcelona legend Messi was on a mind-blowing $167 million a year and $610K a week, based on the deal he signed in 2017. The four-year-long contract with the Catalan club would be worth $671 million. He received over €115m as a bonus simply for signing the contract.

There was also a loyalty bonus of €78m, separate from his lucrative salary and image rights. In comparison, Cristiano Ronaldo at Juventus only makes $34 million as of May 2022.

Messi’s current Barcelona contract was disclosed aggressively at the start of 2022, creating shockwaves throughout the sport. Barcelona has confirmed that they plan to sue El Mundo for the leak to reveal the details of Messi’s contract without their permission.

What is Lionel Messi’s net worth?

As of March 2022, he was worth twice as much as his former Barcelona teammate Neymar, a commercial juggernaut but less than Cristiano Ronaldo.

What endorsements deals does Lionel Messi have?

Messi’s most well-known sponsor is Adidas, with whom he has a long-term contract. Their collaboration began in 2006 after Adidas defeated Nike in a battle. On the pitch, the attacker wears the brand’s boots and promotes a variety of other products. Ronaldo, on the other hand, is the face of Nike.

As Messi’s star power has increased, he now represents (or has represented) a large number of multinational corporations. Among the companies are MasterCard, Pepsi, Gatorade, Huawei, Dolce & Gabbana, Gillette, Turkish Airlines, and Audemars Piguet. He’s also been the face of Konami’s Pro Evolution Soccer and EA Sports’ FIFA game franchises.

These collaborations have significantly increased his net worth by offering an additional source of income and his Barcelona earnings.

What investments and businesses does Lionel Messi have?

Messi has his own apparel brand in addition to his Adidas items. The Messi Store, which debuted in Barcelona in 2019, was his first retail outlet.

Messi’s economic interests were frequently more limited, or at least more private, than those of other players, even as they became more prominent towards the end of his career. Messi has his own hotel, MiM, which he runs with his brother.

What is Lionel Messi’s new pastures?

Messi’s current contract has ended as of 2nd July 2022, and he is yet to sign an extension at Barcelona. This directly translates to one thing, the Barca legend is a free agent and opens to negotiate with clubs of his choice.

Will he sign a new contract at the Catalan club or search for greener pastures? Only time will tell.