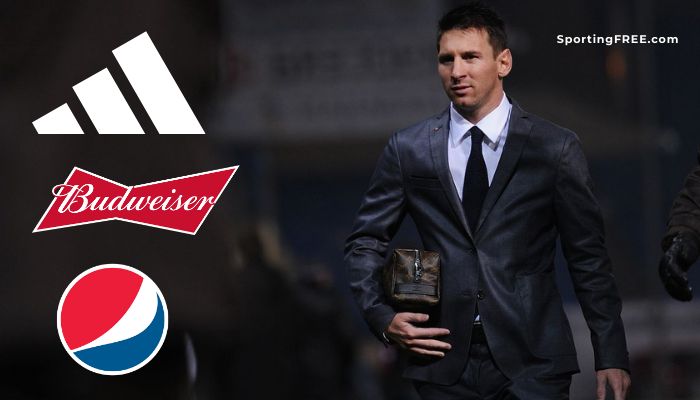 Lionel Messi is definitely one of the world’s most popular athletes. Argentinian international was the third highest-paid athlete in 2023 with an income of $ 104 million. A major part of Messi’s income is from endorsements. Messi has an affiliation with a number of brands. Here are some most popular brands endorsed by Lionel Messi in 2023 and makes money from.

All the brands endorsed by Lionel Messi

Since the beginning of the career, Messi has been wearing Adidas shoes. He took the commitment with the company to next level when he signed a lifetime contract with Adidas. Messi fetches $18 million in a year.

Gatorade is a sports energy drink product of PepsiCo. Messi is the brand ambassador of Gatorade along with other prominent athletes like Usain Bolt, Dwayne Wade etc.

Pepsi and Lionel Messi have been in a partnership for a long time now. Barcelona star has been doing Pepsi endorsements from the beginning of his career.

Ooredoo is a Qatar based telecommunication firm. It has been working with Lionel Messi foundation since 2007. In 2013, Ooredoo declared Lionel Messi as its global brand ambassador.

PepsiCo’s snacks ground brand Lay’s first featured Lionel Messi in its campaign in 2014. Since then Messi has been regularly featured in Lay’s campaign, advertisement over various platforms.

Argentina forward Lionel Messi signed a three deal with OrCam in 2023. OrCam is an Israel based eye care company that works for blind and visual impaired communities.

In June 2019 Lionel Messi signed a four years deal with Konami. As per the deal, Konami launched a special Barcelona edition in the mobile version of PES 2023. Messi also featured on the PES 2023 cover.

Dubai’s Auto Expo signed a deal with Lionel Messi in 2013. Since then Messi has been the brand ambassador of Auto Expo Dubai. The event is held once a year in the United Arab Emirates (UAE).

Jacob and Co. is a watchmaker company that roped in Lionel Messi as its brand ambassador in 2019. Jacob & Co is one of the prominent watchmakers’ companies in the world.