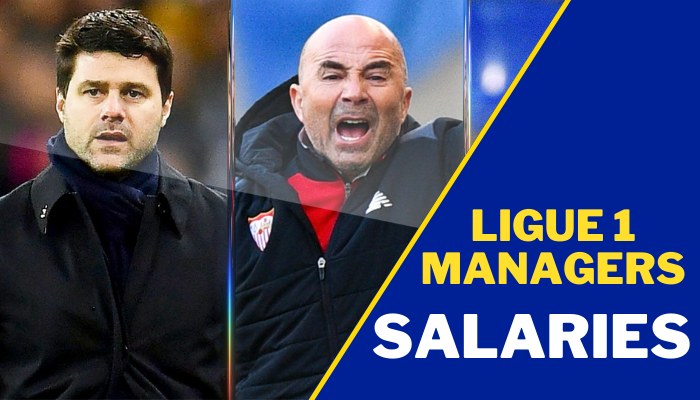 Managers in football are an inseparable aspect of the game without whom not a single match can take place. Managers have very important jobs which go beyond managing matches. They are also tasked with scouting and choosing the perfect players who can be signed by the team. Ligue 1 is the French primary professional league for men’s association football clubs featuring 20 clubs. As per reports, Ligue 1 managers salaries are based on their contacts signed with the club. Paris Saint-Germain’s coach Mauricio Pochettino is the highest-paid manager of the French Ligue 1 with a monthly wage of €550,000.

The Ligue 1 title race is still on and this season France might most likely get a title winner other than PSG who has dominated in past few years. Lille are the league leaders and top the table.

French leagues have been blessed by the presence of some of the top managers of world football for years. Until recently, Thomas Tuchel who is regarded as one of the world’s top coaches was managing the current defending Champions PSG until he was sacked on 29 December 2022.

Other than him there are prominent names like Rudi Garcia, Claude Puel, Niko Kovac in the French league. Let’s look at the highest-paid Ligue 1 managers for the 2022/2022 season.

Who is the highest-paid manager in Ligue 1?

After Tuchel’s departure, PSG appointed Mauricio Pochettino as the manager. He won his first trophy at PSG within 4 days of joining. Pochettino is currently the highest-paid manager in Ligue 1.

Marseille parted ways with Andre Vilas Boas because of a dispute between him and the club. They appointed former Argentina Manager Jorge Sampaoli as his successor. Niko Kovac has completely transformed AS Monaco as the club has regained its form and are back at the top. Christophe Galtier is set to achieve glory as his Lille side is all set to win the French Title.

Disclaimer: All the facts and figures about Ligue 1 managers salaries are based on the analysis, research and reports released by trusted sources.