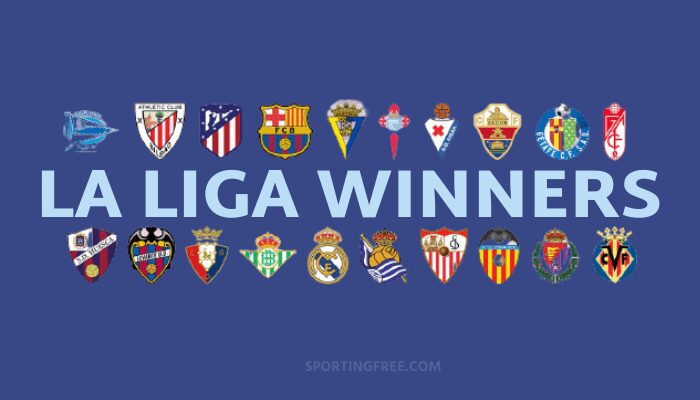 The winner of the first La Liga was FC Barcelona who won in 1929 beating Real Madrid, lets see the list of all La Liga winners and the most successful club in La Liga.

It is one of the world’s most popular football leagues. The ‘Copa Del Rey’ was Spain’s national championship before the beginning of the Liga. With 20 competing teams, the League’s core structure embeds the dual-round robin format. Every season every team has a total of 38 matches, each with two matches against each other.

The 3 clubs worst in the league were relegated to the Second Division at the end of every season, and the top 3 teams in the division were promoted to the La Liga. There have been a total of 62 teams involved in the league over the years.

Who has won most La Liga titles?

In total, there have been nine different LaLiga champions in Spain. These are, in order of number of championships, Real Madrid, Barcelona, Atlético, Athletic, Valencia, Real Sociedad, Betis, Sevilla and Deportivo la Coruña.

Real Madrid has been 34 times championships of the League and is followed by FC Barcelona with 26 titles. In the previous decade, however, FC Barcelona, with its secret weapon, Lionel Messi, took over the league in a fury.

Over the leagues, many clubs have been part of the La Liga, with Real Madrid have won the most titles, i.e. 34, followed by Barcelona with 26 titles.