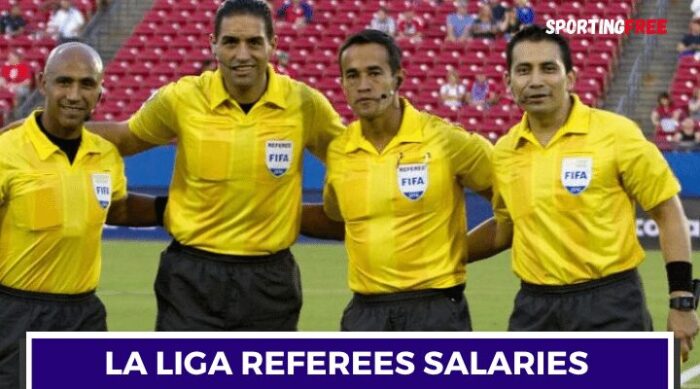 When it comes to contract and salaries the first thing that everyone’s keen on is ‘how much does a top player earn’ or ‘what are the details of his contract’. But a Referee’s effort goes unnoticed. However, it might come as a surprise that the per match fee for a Spanish referee is €6,000 compared to £1,655 for a Premier League referee. Thus it is very well cleared that LA Liga referees salaries and rewards are paid handsomely compared to other leagues.

La Liga is the second most popular league in the world, top players around the world play in the league, and many dreams to be a part of it. So is the case with Referees.

The bigger and better the league is, the higher the requirement of top and experienced referees. La Liga referees are the highest earners among the top leagues in football.

But do you know much do these local and international referees earn per match to officiate in the Spanish La Liga league? Here’s what LA Liga referees earn:

It is not just the match referees who are officiating on the pitch, there are assistant referees and VAR officials as well and La Liga makes sure that they don’t go unhappy.

Premier League is the world’s most-followed and watched league having some of the biggest sponsors and follows a commercialised football pattern. However, they lag way behind to the Spanish league, not only in paying to match referees but also to the assistant referees and VAR Officials.

What’s more shocking is that assistant referees in La Liga make up to €3,000 per match that is more than what match referee makes in the Premier League(£1,655).

While La Liga ensures that referees are paid well, they also make sure there is no disparity in match salary among referees in the league. Thus each and every referee earns an equal basic wage and per match salary.

Experienced referees such as Jesús Gil Manzano and Antonio Matéu Lahoz make it to the list of top earners football referees not just in La Liga but also in the World.

Despite La Liga offering the same basic wage to each referee, these two make it to the highest earners because of officiating more games in a single season than others.