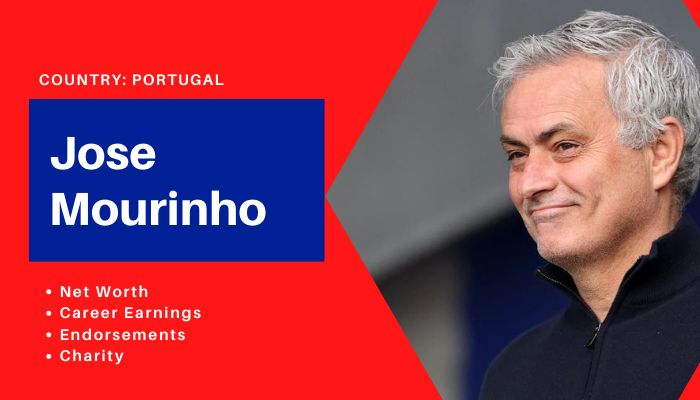 Italian club AS Roma manager Jose Mourinho has a net worth of $120 million. The former Portuguese footballer who managed Tottenham Hotspur, Chelsea, Real Madrid, Inter and Manchester United Mourinho is known for his coaching styles and techniques. He is one of the successful football managers and helped the world’s biggest clubs in the world to lift the trophies which certainly help him to earn millions.

José Mário dos Santos Mourinho Félix is a Portuguese professional football manager and a self proclaimed ‘Special One’. After a failed career as a midfielder for seven years, he became an interpreter for Sir Bobby Robson at Sporting CP and Porto. He went on to become an assistant at Barcelona under both Robson and Louis van Gaal.

Jose Mourinho had a fierce rivalry in the sideline with Arsene Wenger of Arsenal when he managed Chelsea and with Pep Guardiola in England and Spain. He holds the record for having the longest football unbeaten home run by a manager for 9 years between 2002 to 2011.

His accolades all over Europe with various clubs are impressive as he has won around 25 trophies with Porto, Chelsea, Real Madrid, and Manchester United. Jose Mourinho is considered to be one of the most decorated managers in the game.

He was sacked recently with Tottenham Hotspurs (the only club with whom he didn’t win a trophy) after getting having dissimilarities with Daniel Levy. After barely two weeks after getting sacked, Jose got his new job as the manager of the Italian club AS Roma.

He also owns a six-bedroom mansion in London that is estimated to be worth around £25 Million.

According to the Italian newsletter Corriere dello Sport, Jose’s contract at Roma is €4 Million a year with €3 Million as performance-based bonuses making him the highest-paid manager in the AS Roma history.

Jose Mourinho’s contract at Tottenham was a staggering €16 Million per year. However, Tottenham will have to pay him €9 Million per season for the next two seasons he had no break clause.

He has worked with the likes of Braun, American Express, Jaguar, and Samsung, as well as Heineken, EA Sports, Atlantis Hotels, and Audi. Mourinho’s current deals include one with sportswear brand Adidas, Watchmaker Hublot, Athlete Image representations PolarisSports, and management game TopEleven.

Disclaimer: All the facts and figures about Jose Mourinho net worth are based on the analysis, research and reports released by trusted sources.