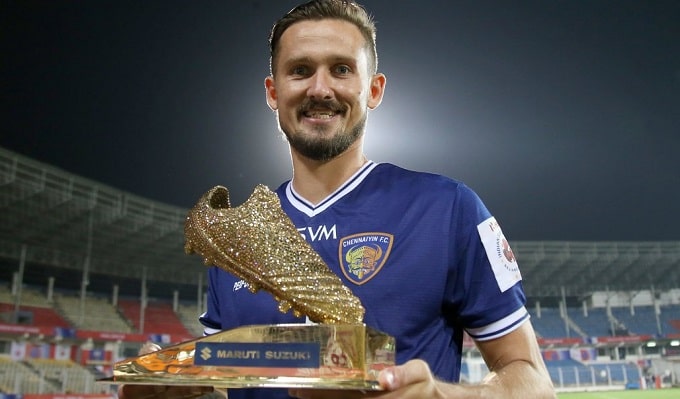 Did you know that Sunil Chhetri is the 10th highest goal scorer in international competition? If not, then no worries as media often fail to highlight Indian goalscoring machines and have fixed their eyes on European football. But not anymore courtesy ISL, yes the ISL has brought the platform, crowd, atmosphere, and some goal scoring giants to the pitch. The seventh edition of the Indian Super League set to kick off on 20 November 2022, let’s look at the list of ISL golden boot winners over the years.

Each year the player got into intense competition for the golden boot, for those wondering what is a golden boot, it is basically a trophy presented to the highest-scoring player at the end of the season. Thus the list of golden boot winners in ISL from 2014 till 2022 is as follows.

Hero ISL golden boot award was started in 2014 with the inception of ISL and was sponsored by Maruti Suzuki. Thus due to sponsoring reasons the award is known as Alto K10 Indian Super League Golden Boot.

The Brazilian emerged as the golden boot winner in the inaugural season as was the top scorer by netting the ball 8 times in his 11 appearances for the club.

Another year and another Chennaiyin forward claiming the golden boot trophy. The colombian bagged 13 goals in 16 appearances for the club. He also scored 2 hattricks in the tournament which helped him get the golden boot.

Marcelinho Leite proved to be a complete player for Delhi Dynamos in 2016 as he scored 10 goals in 15 games as well as assisting 5 for his teammates. Marcelinho’s effort was the major reason for Delhi Dynamos qualifying for the playoffs that year.

With the entry of Coro to the league in 2017, he just raised the goalscoring standards. The Spaniard scored impressive 18 goals in 20 games and even assisted 5 goals. Coro scored at a rate of almost 1 goal per game, which is the highest goalscoring rate in an ISL season.

Another year and again Coro is on the list of most goals scored. The guy just doesn’t stop, he scored 16 goals in his 20 appearances for FC Goa. And one thing which many fans won’t know is that Coro is ISL’s all-time highest goalscorer with 48 goals in just 3 season.

But the league committee decided to take the number of assists into account as the number of goals was tied. So that put Ogbeche out of the race as he had only 1 assist. Still, both Roy Krishna and Valskis were tied with 6 assists each. Then taking the game time into consideration Valskis became the ISL Golden Boot winner 2019-20.