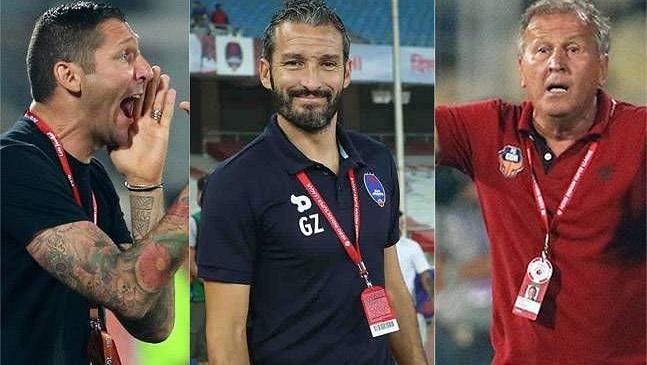 The football season is here as the biggest stage in Indian football is all set to host 11 teams across the country in a 4-month long tournament. Yes, the ISL is back with its 8th edition and the league will witness 115 thrilling matches during this course to see who will be crowned as the champion. The biggest excitement about a tournament is generally its players and the quality of football, but what we as audiences often fail to recognise is the Conductor of the orchestra. Yes, the managers. In this article, we will look at all the ISL 2022-21 managers and head coaches.

A manager is the pioneer of any team in football, and the truth is that we are somewhat aware of European managers, but we fail to give the spotlight to the ones who are developing our local clubs.

Hence this article will guide you to be aware and know more about all 11 managers coaching in this year’s ISL.

Lopez hails from Spain and is a defender by profession. He has previously managed the likes of Bolivia, Valencia, and Celta. What’s interesting to note is that the Spaniard joined ATK in their inaugural season and won their inaugural trophy. However, Lopez left ATK in 2016 for Pune City, but eventually returned to ATK in 2019 and again won a trophy with them, making them the defending champions in ISL.

Carles Cuadrat also hails from Spain and is a relatively new manager in the field. Frankly, Bengaluru FC is the biggest managerial tasks of his career. The Spaniard holds numerous records while coaching Bengaluru FC, he was the assistant coach in Bengaluru’s inaugural season and led the team to their first title in his first year as the blues manager in 2018. He is the only manager in ISL to always qualify for playoffs.

Csaba László hails from Romania and it will be his first year in ISL. László replaced Owen Coyle for the job. The Romanian has years of experience coaching Hungarian and Scottish Sides. Adding on, he has won the manager of the year award twice, once in his term in Hungary and another in Scotland.

The living legend in football, One of Liverpool’s greatest players and the 7th highest goal scorer in English football, Robbie Fowler is managing in ISL. Yes, the absolute legend of the game Robbie Fowler is recently exploring himself into a managerial role. Previously he managed Brisbane Roars and is now all set to train East Bengal SC.

Juan Ferrando is another manager in ISL 2022/21 who hails from Spain. He will manage FC Goa for the upcoming edition after moving from Volos, where he won 2 trophies with them. What’s interesting to see is that the Spaniard started managing clubs at the age of 18 as he was sidelined from playing football due to injuries.

Manuel Márquez Roca also hails from Spain. He has replaced Albert Roca who joined as an assistant coach at Barcelona. Roca has previously managed the likes of Espanyol B and Las Palmas.

Owen Coyle who hails from Scotland has made a remarkable impression in his managerial career while serving his term in England. Yes, Coyle has managed the likes of Burnley, Bolten, Wigan and has won manager of the month twice. The 54-year-old even managed Chennaiyin FC last year and reached the finals with them. However, he parted ways with them to join Jamshedpur FC.

Kibu Vicuña started managing clubs when he was just 16. He has even trained the likes of Chelsea captain Cesar Azpilicueta. The best managerial moment of Kibu’s career was when he won the I-League last year with Mohun Bagan. This year would be his first ISL venture as he would be coaching the men in yellow.

It feels that ISL is full of managers hailing from Spain and Sergio Lobera is no exception. The Spaniard has proved his managerial worth in the past as he was an assistant at Barcelona and managed the likes of Las Palmas and Goa. He even won the Super cup with Goa in 2019. This year would be his first year with Mumbai City FC.

Gerard Nus is the youngest manager in the ISL as he is just 35. He started his managerial career back in 2010 and at such a small age he has a rich career already as he has managed Brighton, Elche, Rayo Vallecano, and now all set to coach Northeast United.

Stuart Baxter is the oldest manager in the ISL 2022-21, and the most experienced and awarded manager too. He has managed the likes of South Africa twice, England Under 19, and many small clubs to whom he led to many glories. This year Baxter would be offering his services to Odisha FC.